Yesterday we showed you a painting titled “Greenwood Cathedrals,” a 48 x 60 work in oil by Kim David Cooper, a high school classmate.

It depicts the 129,000-bushel single-leg elevator built in 1951 by Tillotson Construction Co.

This time the view is from the Greenwood cemetery and places the Tillotson elevator on the right.

Although “Corn and Cathedrals” was sold, “Greenwood Cathedrals” is on display at Cooper Studio & Gallery, 1526 Silver St., Ashland, Neb.

This copyrighted image is used with permission of Kim David Cooper.

It has come to our attention that high school classmate Kim David Cooper, an artist, has completed a numinous landscape that depicts the Greenwood, Neb., grain elevator built in 1951 by Tillotson Construction Co.

In this view from the north, it’s the elevator on the left of the canvas. 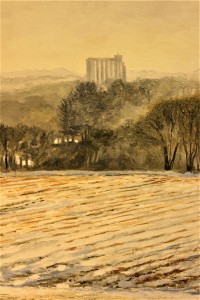 Detail view. This copyrighted image is used with permission of Kim David Cooper.

Anyone who drives between Omaha and Lincoln on U.S. 6 will notice this elevator, which has a storage annex that was also a Tillotson job.

We have posted about the Greenwood elevator before; all the specs and photos can be found by using this link.

“We are Cooper Studio & Gallery and have been at this location for almost 17 years,” he wrote in an email. “I do a lot of plein air painting and commission work for customers.  Also framing and some restoration.”

It was my first contact with Cooper since 1972, who was good at baseball as well as art. Nice to come together again after 46 years–all because of a grain elevator.

This photo from the Tillotson Construction Company archives shows two painters on a flying scaffold at an undetermined elevator.

The following passage is by my Uncle Merle Ahrens, who recalls spending the summer of 1955 with my Uncle Mike Tillotson, painting elevators in Nebraska:

When Michael and I started work, all the concrete pouring was complete and we were given the task of painting the outside of the whole elevator. We painted it using a lime-base whitewash.

We had to crawl over the edge of the top of the tank onto a flying scaffold. The scaffold was held up by a pair of rope block-and-tackles connected to a pair of wood beams that were extended about two feet over the edge of the tank. The wood beams extended about ten feet inboard and were weighed down with sandbags to keep the scaffold from falling. The scaffold was made up of a pair of two-by-twelve boards with a metal frame at each end and two-by-four railings around it. The rope block and tackles were attached to the scaffold on the ground. We had to pull the scaffold up to the top every time for each ten-foot width we painted.

There was an old man on the ground who mixed the paint and pulled it up to us in a five gallon bucket. He had a harder job than we had. All we had to do was brush on the paint and pull the rope to release the half hitch that held up the scaffold and let gravity work to lower it. The “flying” part of flying scaffold was when the wind was blowing. You would fly halfway around the tank.

Merle Ahrens in 2011 at his home in Titusville, Florida.

Every night we would take off our Levi’s and stand them in a corner. There was so much paint on them! Yet one pair lasted all summer.

After a couple of months we finished painting the elevator in Lincoln and went to David City to paint another grain elevator. This time we used a new latex paint. It was very slow-drying and the wind kicked up a lot of dust. The elevator ended up white with grey stripes.

We kept hearing of accidents at other sites. One man [Larry Ryan]was said to have fallen from a plank used to walk between the tops of two tanks. He was wearing new boots and slipped.

Another was killed when roofers removed the sandbags holding the beam for the flying scaffold so they could hot-tar the roof.

A couple more were hurt while riding on a bucket and the clamps holding the cable slipped. The clamps were installed wrong.

I do know for a fact that one worker at Lincoln was hit in the face when a five-gallon bucket with concrete in it fell while he was using a rope and pulley to lift it overhead.

Uncle Tim Tillotson recalled the challenge of painting while the scaffold flew back and forth in the wind. “When you’d come back you’d get a few licks in with the brush,” he said.