The first was at Cedar Bluffs, a village of 600 overlooking the Platte River. The Farmers Union Cooperative Association location was quiet when we arrived around 9.30 a.m., so we invited ourselves to walk the site and take photos.

Cedar Bluffs is a smart-looking operation, as might be expected from “Nebraska’s Oldest Cooperative Since 1888.” The main house, about to celebrate its 70th birthday, and the annex that came along nine years later appear to be in fine shape.

The Cedar Bluffs job is noteworthy for its rectangular headhouse. The company’s graceful signature, the oval headhouse, was still to be perfected.

Another unusual circumstance is the lack of a central driveway going through the structure. A note with the entry says, “Truck Dump Grate No Dr’way.”

The co-op lists capacity of Elevator C at 110,000 bushels–a discrepancy when compared to Tillotson records. 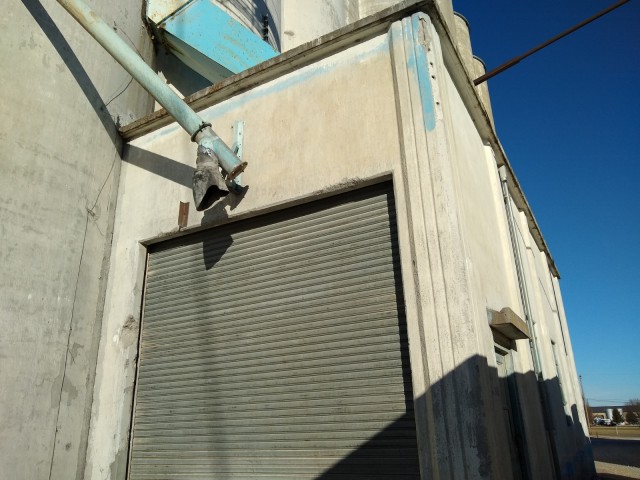 Without an integral central driveway, an outside dumping grate serves the elevator, now starting its eighth decade.

Cedar Bluffs was built on an original plan that included four storage tanks of 16 feet in diameter and reaching 120 feet in height.

In 1950, a concrete elevator was a big splurge for a small co-op. Besides no central driveway, Cedar Bluffs did without the luxury of an electrically operated manlift–it was hand-operated.

The 300,000-bushel annex and the grain dryer were added in 1959 for $150,000. It is unknown who did this job; the manhole plates are blank. We do know that Tillotson was pretty much finished with new construction by then.

We hope to learn more. Meantime, this is the first of two posts from Cedar Bluffs. Complete specs will follow.