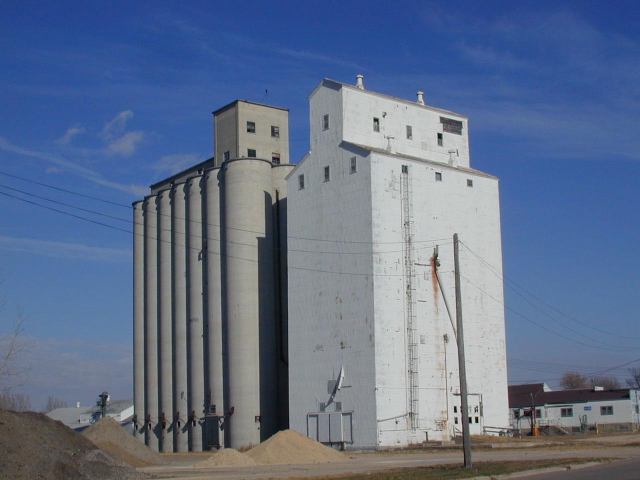 Our friend, Brad Perry, saw the recent posts about Cargill history and was prompted to send some of his photos.

Here he shows us one of Cargill’s early concrete elevators. It’s located in Elmore, Minn., a tiny town in Faribault County, in the south-central part of the state right on the Iowa line.

As railroads pushed west in the 1870s, Will Cargill expanded his grain storage along the lines through northern Iowa and southern Minnesota.

And as the era of reinforced-concrete elevators unfolded, Cargill’s successors continued building.

We don’t know a thing about this elevator’s dimensions or who might have built it, but how impressive is the wooden elevator on the right? It stands almost shoulder to shoulder with the more modern concrete one. 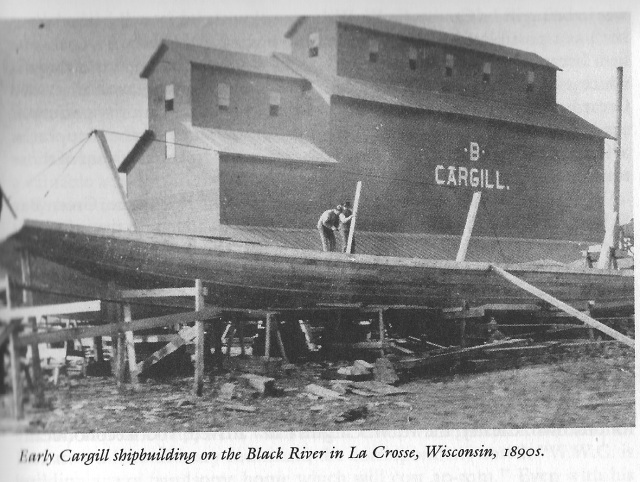 Although it’s understandable why, we fail to appreciate how big and well-developed the grain business already was by the the years after 1895, when electric motors were adopted to power internal mechanisms and reinforced-concrete was first used for elevator construction.

This much we take away from Section One of Cargill: Trading the World’s Grain. Will Cargill, the “Frontier Entrepreneur” of the section’s title, boldly expanded his operation as the railroads pushed northwest and Minneapolis became a center of trade. 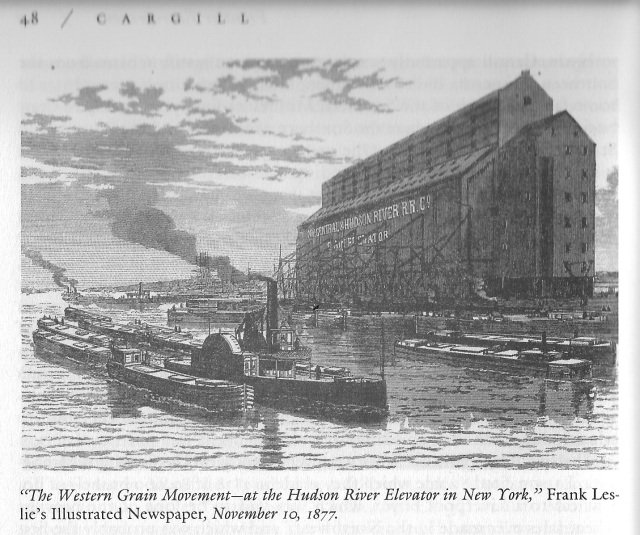 We tend to think of wooden elevators as modest structures, but in the 1870s the New York Central & Hudson River Railroad had two massive terminals in New York City holding 3.5 million bushels of grain for export. Cargill shipped over the Great Lakes to Buffalo and then by rail to the terminals.

Buffalo also had millions of bushels of capacity in its multitude of elevators.

As early as 1873, a year of economic panic and the start of a profound international depression (not to mention a Midwestern grasshopper plague), Will Cargill was building elevators and warehouses along the railroad tracks. He shelled out more than $12,000 for “a large elevator” in Cresco, Iowa. 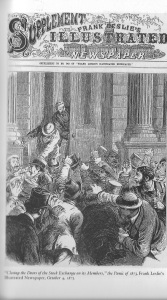 Three years later Cargill had settled in La Crosse, Wisc. When he and his wife, Ella, went on a pleasure trip to Chicago, a La Crosse newspaper said, “They have been making so much money on wheat they they’ll buy Chicago if they feel like it.”

And in 1879, Cargill’s office became part of a telephone network in La Crosse. Author Wayne G. Broehl, Jr. points out it was only three years after Alexander Graham Bell invented the telephone.

At the same time Cargill expanded along the Green Bay and Minnesota line with nine warehouses. As a lake port, Green Bay became an important focal point, and here Cargill and his partner bought a 30,000-bushel warehouse and leased a 250,000-bushel terminal. The latter, which stood 100 feet high, had been built in 1862 for $80,000.

Decades later, Tillotson Construction Co., of Omaha, showed the value inherent in a fire-proof elevator built of reinforced concrete. In 1946, for example, Tillotson put up a 250,000-bushel concrete elevator at Dike, Iowa, for $87,250.

In the early 1880s, a new type of wooden elevator, the cribbed elevator, became common. As Milo S. Ketchum wrote in The Design of Walls, Bins, and Grain Elevators, published in 1907, “In this construction, 2″ x 4″, 2″ x 6″, or 2″ by 8″ are laid flatwise, so as to break joints and bind the structure together and are spiked firmly.”

Some called the method a “log cabin” approach. It resisted the insistent, fluid-like pressure on the sides and made for stout construction.”

In the 1880s, with another partner, George Bagley, Cargill pushed into the Dakota Territory with a small elevator at Aberdeen and several warehouses. By 1886, Bagley & Cargill also had a 250,000-bushel terminal in Minneapolis.

Combining all Cargill-controlled storage facilities, there was 1.6 million bushels of capacity–ready for the bounty of wheat that poured in as farming began in the Red River Valley.