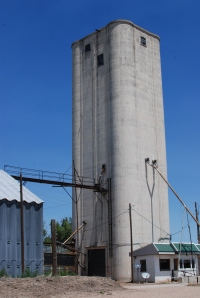 Flat storage at Traer, Kan., for farm equipment, and an unused elevator.

During the heyday of elevator building, no sooner did an elevator go up, than it filled up, and left a town wanting for storage. The first option was to add an annex. But where economics dictated, cooperatives resorted to the simple expedient of horizontal storage. In the Farmers Elevator Guide during the 1940s and 1950s, between the slick ads for elevator builders, companies advertized Quonset-style buildings for flat storage.

A common sight in Nebraska and Kansas are long, flat piles of corn covered in tarps held down with old tires. At one grain facility, I saw a front-end loader filling grain trucks from one end of one of these great corn piles. At another, workmen were hurriedly applying tarp and tires in advance of a rainstorm. It seems the demand for ethanol has once again ramped up corn demand beyond the capacity of vertical storage facilities, or at least the ability to pay for them. 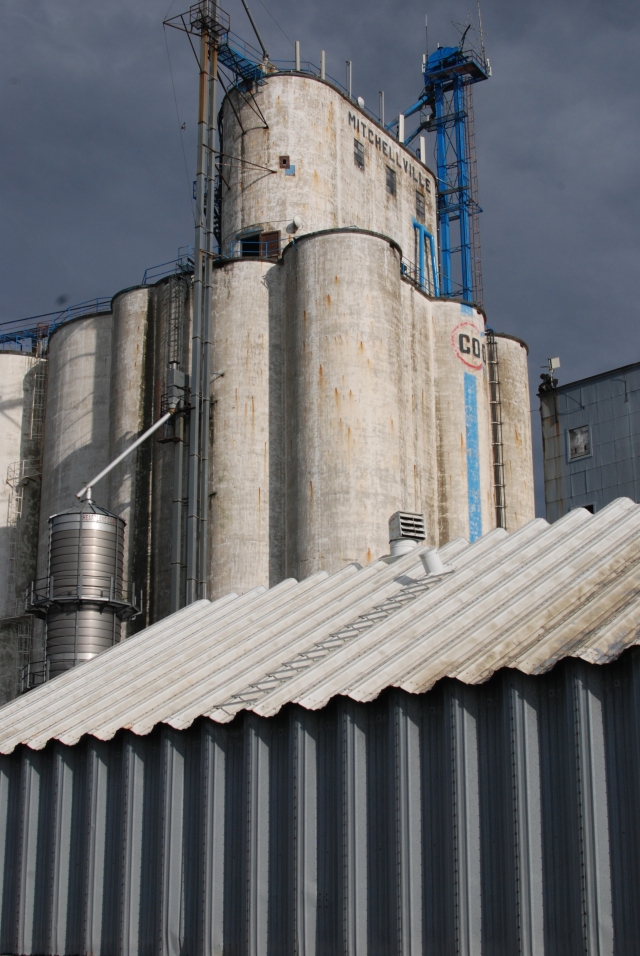 Mitchellville, Iowa: the Heartland Co-op elevator with the former feed mill and dryer. One of the two old flat-storage buildings for corn is in the foreground.

At two of the sites I recently visited, where the Tillotson-built elevators became insufficient for their purpose within a few years, I saw examples of  corrugated-style flat-storage buildings that were added after the original elevators were filled to capacity. These  served during a brief stretch of time until replaced by more modern, efficient bins, when the buildings found other uses. They were well suited for many farm needs since they could house virtually anything and were built to endure, once their corn storage days ended.

Mitchellville, Iowa, a site where an elevator built by Tillotson Construction of Omaha operates, has two such buildings.  They look like ordinary metal buildings, but the tip-off to their special use is the ladder leading to an opening in the roof where the auger operates. Both buildings have new jobs since the large annex additions were built beside the old elevator–one is a machine tool shed, and the other handles seed. 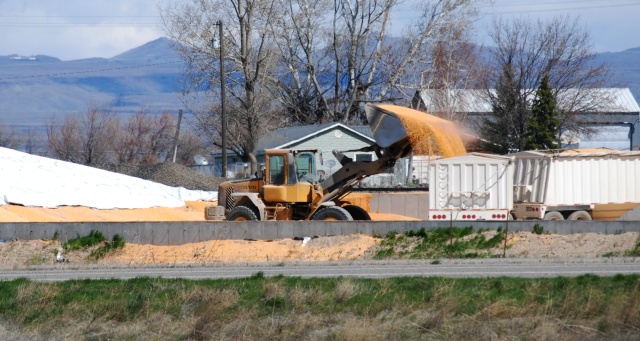 Idaho corn stored under a tarp is loaded onto grain truck. 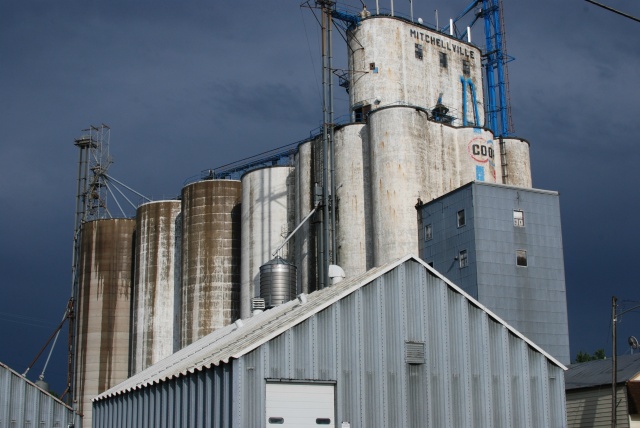 The Mitchellville elevator is visible from Interstate 80, and the rounded head house drew my attention as we headed through Iowa on our way home from our recent trip out West. “Just one more stop, OK, kids?” I said, and they answered with groans. I think I promised ice cream to quell the protest. 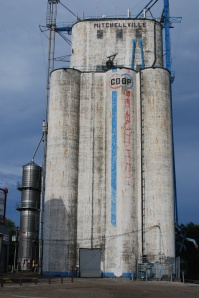 The main elevator built by Tillotson Contruction Company of Omaha, with grain drier.

I parked the van, air conditioner running, in a shady spot and hopped out with my camera. Thunderheads threatened nearby, but the storm seemed to be moving off, and the sun peeked out and illuminated the scene. I took advantage of the beautiful light to photograph the elevator.  As I finished up, I saw a truck rounding the corner from an alley into the gravel lot beside the elevator, so I flagged the driver down to ask if he knew anything about it. We were in luck.

The driver introduced himself as Ed Baldwin, a grain truck driver for Webb Farms. He was more than happy to talk about the elevator, having trucked “at least two million bushels” in and out of Michellville. Bill and Stan Webb own the farm, and Ed purchased his truck from their father who used to truck his own grain. Ed gave me a quick outside tour of the elevator property. 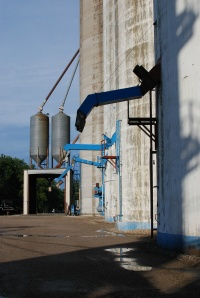 The Younglove annex viewed from the driveway.

Ed explained the Heartland Cooperative operation at Mitchellville. He did not know the builder of the “head house,” as he termed the main elevator, but he knew the adjacent annex was built by Younglove in 1972.  The bins had numbers and he pointed out the function of each one. All the way to the left was a new bin with its own leg that was built in the 1980s and used for damaged corn. Immediately to the right of it, on one end of the Younglove annex, was a bin dedicated to soybeans. The rest of the annex held corn, with the main house taking all the wet corn since it gave access to the grain drier.

The Younglove annex is placarded with the date of construction.

During harvest, the employees kept a grueling schedule filling the bins, especially during a wet year. Jim Dietrich, grain manager for Heartland Co-op at Mitchellville, would pull a twenty-four hour shift to accept the grain into the main elevator and dry it. The drier had a capacity of seven thousand bushels per hour, which would limit the amount of grain that could be taken in. Ed said the main house would take seven semi loads per hour of grain that needed to be dried. Shipments from the elevator were by rail, unless capacity was reached and grain needed to be trucked.  Trucking would be the exception for Mitchellville’s operation.