The Wahoo, Nebraska elevator, built by the Tillotson Construction Company of Omaha, Nebraska

Another stop on my recent elevator trip was Wahoo, Nebraska. Dad tipped me off that it might be one of Tillotson’s projects. Wahoo is the seat of Saunders County, where Dad lives, and he frequently has occasion to stop there.

Wahoo’s elevator, at first glance, appeared unused. It was closed up tight, and the only indication of any activity was a sign warning workers to stay at least three feet away from any antenna, and to contact AT&T before performing any maintenance or repairs near their equipment.  Ah, hah!  Then I noticed the wires running to the top of the structure. I walked around the elevator, taking pictures.

Next door to the building was a Pet Rescue center, and as a woman was leaving there with a little dog in her arms, I asked her about the elevator.  While she did not know the builder, she said the elevator was privately owned by David Rood, and that at present, the elevator was full of corn.  But she commented that he probably made more money from the AT&T installation. I had heard of cell antennas being installed in every kind of tall building–even church steeples–but it had never occurred to me to look for them atop an elevator. 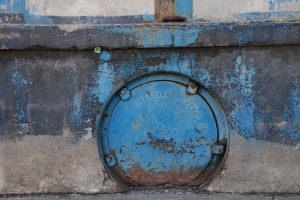 The next circuit around the elevator produced the answer I was looking for. Right there, adjacent to the sidewalk, in bright blue paint, was a manhole cover.

Some neighborhood teens were hanging around the street, in their cars, and when they saw me kneeling, taking the manhole cover shot, one of the boys shouted out, “What are you doing?”

“Taking pictures of the elevator!” I said.

The young man wanted to know why. When I said it was for a blog, I guess that was enough for him. Anyway, his attention went back to something on his cell phone.

The Wahoo elevator is an attractive feature of the town, fitting naturally with the older buildings along the main street. A man at a local pub, seeing my camera, popped out and said curiosity got the better of him. I told him what I was doing there. I guess a tourist with a camera along the street is a little unusual. And Nebraskans, by nature, like to know who is about.

4 comments on “In Wahoo, Nebr., Tillotson’s elevator finds new life as a cell tower for AT&T”