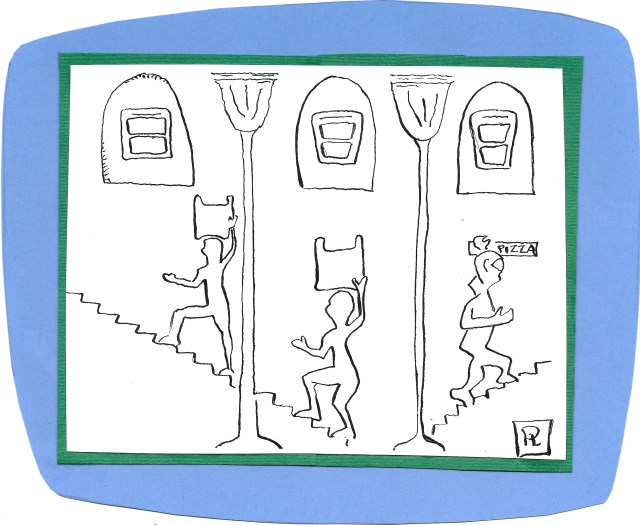 As long as agriculture has existed, food storage has been essential to human survival. Grains could be stored without substantial spoilage more easily than other foods, so societies engineered grain storage very early, which enabled people to congregate in cities. In the book of Genesis in the Bible, the story of Joseph relates how he helped Egypt store grain against periods of famine. It was a successful strategy.

48 During those seven years, Joseph collected all the excess food in the land of Egypt and stored it in the cities. In every city he laid up the food from the fields around it. 49 So Joseph stored up grain in such abundance, like the sand of the sea, that he stopped keeping track of it; for it was beyond measure.

The practice of grain storage that was credited to Joseph in the Bible was indeed part of the long-standing economic system in Egypt.

Surviving ancient Egyptian city sites, while fairly rare, have drawn renewed interest as archaeologists explore how urban societies developed. A prominent feature of Tell Edfu, an Egyptian city studied by the University of Chicago, is a courtyard containing seven circular mud-brick silos, built together to store surplus grain. Each silo measures 5.5-6.5 meters across. The 3500 year-old site was built beside an administrative center, a feature that points to a period of prosperity measured in grain, which was the currency of the time.

Another example of early grain storage was discovered in Lancashire, England, in Ribchester. This location was an early Roman outpost where a garrison was stationed. Stored grain was needed to provide for the soldiers and their livestock. When the Roman soldiers abandoned the fort, evidence shows that the remaining stores were burned and the storage site destroyed.

Every grain operation has to contend with temperature, humidity, and spoilage when storing grain. The Romans found ingenious solutions to the same problems we encounter. Their granaries had thick walls with column-supported floors, leaving void areas underneath, and drainage gutters to keep rain diverted away. These measures kept the grain cool and dry. Building the granaries above ground level also helped keep rats and mice out.

All that remains at the Ribchester site are the thick wall bases, outlining the footprint of two rectangular bins, and the support columns that held the old flagstone floors above the ground. Signs of burned grain and broken flagstones tell the story of the abandonment of the outpost.

I was curious whether ancient Greece used similar storage. Accounts I read pointed out that they used amphorae, or large pottery jars, to transport commodities including grain. They imported their grain supply across the Mediterranean Sea using these vessels, while prohibiting grain exports, to ensure their food security. Amphorae were convenient because they could be stored, but they were also portable. They were an ideal solution for foodstuffs moving through a major trading center. I wonder if consumption kept up with supply to the point that large-scale permanent storage was not needed. It is a good topic for further exploration.

Grain is such an ordinary part of life for us that it goes mostly ignored, though the history of grain is compelling. I am forever curious. Perhaps more of this remarkable history will be uncovered. I will share whatever I find.