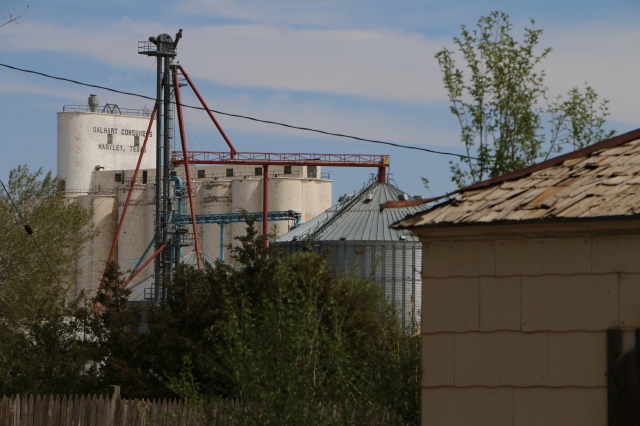 The elevator built by Tillotson Construction Co. in Hartley, Tex., fulfilled a crying need for grain handling and storage there in 1950. More capacity would be added, but for the time being this 300,000-bushel elevator was the answer.

Although records say it followed the Bellwood, Neb., plan like Burlington, Colo., which was another of Tillotson’s bountiful 1950 crop of elevators, Bellwood was a single-leg elevator. Hartley and Burlington were twin-leg elevators. We wonder how difficult it was to adapt the standardized design to include two legs.

In the early days, Tillotson’s talented engineer, Wayne Skinner, did the calculations.

In its construction, the Hartley elevator used 2,436 cubic yards of reinforced concrete and 20.3 yards of plain concrete for the hoppers.

Access points to the two legs inside the Hartley, Tex., elevator.

Some 131.71 tons of steel (including jack rods) were needed for the job. That translated to 108.14 pounds of steel per cubic yard of concrete.

The 24-inch-thick main slab occupied a space of 66 feet by 72.5 feet for an area of 4,806 square feet, according to Tillotson’s records. We get 4,785 feet from our arithmetic and don’t know how to account for the discrepancy unless the note saying “Act. outside on Ground” means something in this regard.

Below the main slab, the pit reached the depth of 19 feet 0 inches.

Weight of the reinforced concrete came to 5,004 tons. Plain concrete for the hoppers totaled 40.3 tons. Grain filling the tanks, or silos, weighed as much as 9,000 tons.

With another 28 tons of structural steel and machinery, the elevator weighed 14,299 tons. Again, we find a discrepancy, with our calculations showing 14,072 tons.

Bearing pressure on the drawform walls of the silos maxed out at 2.975 tons per square foot.

The Bellwood plan provided for 120-foot-tall silos, but those at Hartley (and Burlington) were 115 feet tall.

The outside of the cupola, or headhouse, was 23 feet wide, 63.75 feet long, and 44 feet tall. Like Canyon, with its five-foot-taller silos but lower headhouse, the Hartley elevator still reached 159 feet in overall height.

The man lift operated with a 1.5-hp motor. The truck lift in the 13-foot-wide driveway used a robust 7.5-hp Ehrsam motor.

No special notes attached to the Bellwood plan. Tillotson had a solid design that enabled construction of a mighty elevator in many locations by small crews working around the clock. The one in Hartley keeps doing its job.