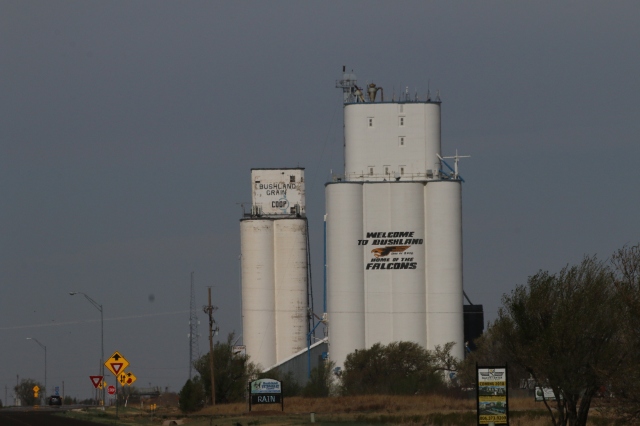 Leaving Canyon, the home of West Texas A&M University, after a cheese omelet at KJ’s coffee shop, I drove north and soon skirted the west-side sprawl of Amarillo, the largest city in the Texas Panhandle. There were housing tracts, car dealerships, and Westgate Mall.

The land was dead flat, the sky blue, and the wind gusted with vehemence.

A few of Amarillo’s 275,000 residents may sometimes think about the importance of grain elevators, but it’s likely many more are preoccupied with the Toyotas and Fords I was seeing on lots along the way and with the Bath & Body Works and Hot Topic shops in Westgate Mall. They can afford to shop here because they work in factories building V-22 Osprey aircraft and, on an atomic reserve northeast of the city, nuclear bombs.

And of course there are cattle to be slaughtered.

At I-40, I turned west and continued across the plain. 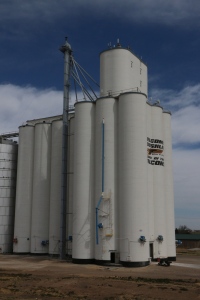 Of course, I was thinking about the late Neil Lieb’s stories. Readers of Our Grandfathers’ Grain Elevators may remember that Lieb tracked us down three and a half years ago and told tales about the jobs he worked, and the people he worked with, when he was with Tillotson Construction.

Company records show the 252,000 Bushland elevator was built in 1950, the same year as Canyon, and it followed the Dike, Iowa, plan from the year before. That means eight tanks measuring 18 feet in diameter and 120 feet high. The 12 x 17-foot driveway had eight bins above. Altogether, there were 20 bins for grain and one dust bin.

When I sighted Bushland, I thought of Lieb’s statement that “every job had a peculiarity.” In this case, he provided an account of the struggle to maintain accuracy during the continuous pour.

“Somewhere between checking the water level when we started and checking it in the middle, the forms became about 3.5 inches off level,” Lieb said.

“That’s because one guy who was running the jacks on one side wasn’t making his rounds as he was supposed to. The guy was fired on the spot.

“Now you had to get the decks level again. When you’re going off-level, you’re going at an angle. So what happened, you got a little swerve in the tanks. It’s only an inch. You can’t see it. The only time is if you go up and down on a hoist. So the bottom and top are not exactly over each other.

“It had no effect. Not enough to be significant. We were about 65 or 70 feet in the air when it happened.” 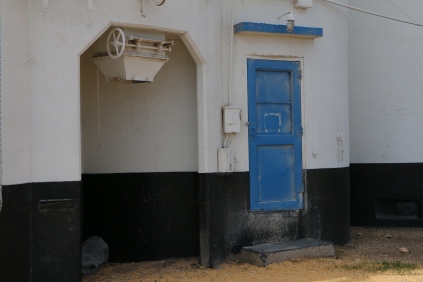 It might be news to Ag Producers Co-op, which runs this and about two-dozen other Panhandle elevators.

But when I sighted Bushland, the elevator gleamed like nobody’s business in the sun. There were seven narrow, tall windows in the east side of the headhouse. Everything looked impeccable, and indeed this would turn out to be one of the nicest elevators I’d visit on my road trip through the Panhandle and western Oklahoma.

Tomorrow, Niel Lieb’s account of a leap into the sand pile.