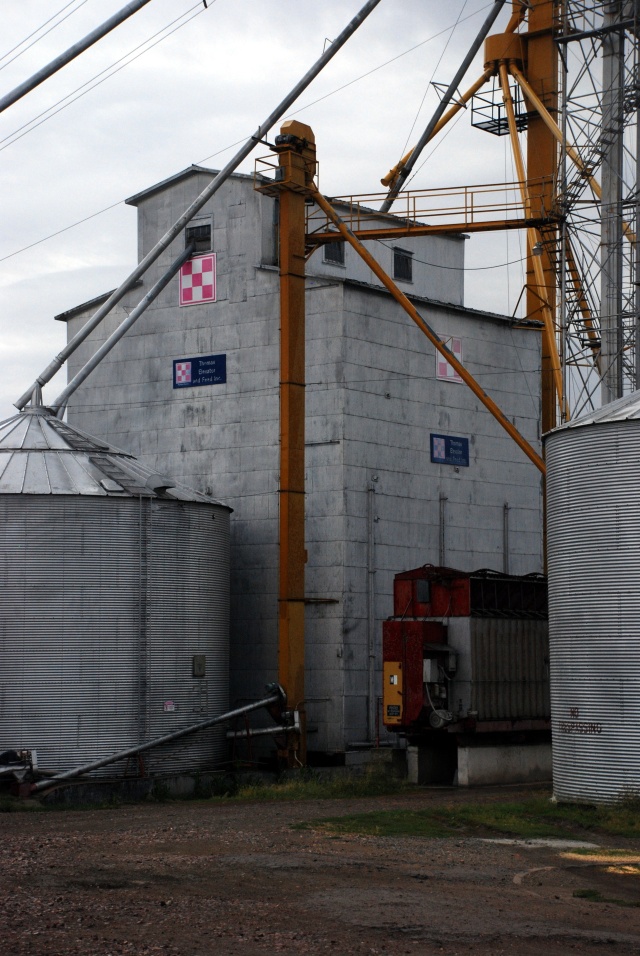 The wooden elevator at Wymore, Neb., is representative of the style of Van Ness Construction.

When we began investigating the elevators our grandfathers built, we had no idea how far the project would take us or what surprises would unfold. With the discovery of Van Ness Construction Company of Omaha, we have learned about the beginnings of the Tillotson family enterprise, and have entered a new phase of our search. 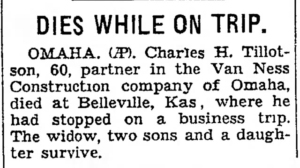 We knew that Charles H. Tillotson, patriarch of the family and great-grandfather of Ronald Ahrens, built elevators before the days of slip-formed concrete. We found only one Tillotson elevator, made of wood, that predated the elegant concrete structures that sprang up all over the Midwest in the ’40s and ’50s–at least we found its obituary in a news video of its fiery demise. That 1940 vintage elevator, in Hawarden, Iowa, was built two years after Charles died. It burned down in 2006. We didn’t find, at the time, a project that we could attribute to Charles.

Then we had a breakthrough, thanks to Ancestry.com.

Ancestry has a wonderful collection of city directories. I had seen listings for the Tillotson family in Omaha before, but I missed a significant data point. While searching for Sylvia (Mayer) Tillotson, the wife of Joe and sister of Eugene Mayer, I discovered an Omaha directory for 1936 in which Charles H. Tillotson was listed as president of Van Ness Construction Company. Further Internet searches revealed some of the sites where Van Ness built its small steel-cased wooden elevators, but as yet we have found none that have survived.

Now we hope to find an existing elevator from the days before Joe and Reginald Tillotson dreamed up their slip-formed concrete designs. So far the closest we have come is an elevator that perished in a fire in Scribner, Neb., in 1971 , a nightmare that repeated itself in June, 2013.

Also, in a Google satellite image of the town of Diller, Neb., another identified site, a square concrete pad with a grain spout lying alongside it is located near new steel bins, right where an old elevator should have been. In Rydal, Kan., you can see a concrete pad with concrete pits near a horizontal storage building, with the remains of a rail siding alongside. I was a little surprised to find evidence of earlier elevators at these sites, but of course digging up tons of concrete for no special reason would be unnecessarily expensive, so there are remains.

Everywhere we looked for these ancient elevators, we found evidence of obsolescence and ultimate destruction, with little left to identify the sites. Newspapers were the only way to find the locations. Fire certainly destroyed some of them. For those that remained, the adoption of concrete and much larger storage facilities turned these old Van Ness elevators into relics and ultimately spelled their doom.