William Osborn at the wheel. Much of his time was spent selling elevators to prospective buyers.

The Mayer-Osborn Construction Company built their elevators from 1949 until about 1955. To do this, they had to beat out a number of formidable competitors, both large and small, vying for the same jobs. But they did not win the contract every time they tried. One example of their perseverance survives at the Frenchman Valley Co-op at Wauneta, a town in southwestern Nebraska. Mayer-Osborn did not win their bid, but their contract proposals, made over a period of several years, are still kept in the co-op vault among blueprints and records spanning almost 70 years.

The cover letter for the Mayer-Osborn contract proposal at Wauneta, Neb.

When I was first trying to get a handle on the scope of Mayer-Osborn’s business, I asked my dad, Jerry Osborn, which partner did most of the marketing. I was under the mistaken impression that Eugene Mayer was in charge of all that, and I thought that all my grandfather William Osborn had to do was show up and start pouring concrete.

“No,” Dad said, “Gene Mayer took care of the office and accounting, but your grandpa did a lot of the sales.” 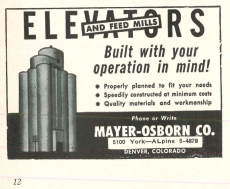 This ad for Mayer-Osborn Company ran in Farmers’ Elevator Guide over a period of several years in the early 1950s.

Grandpa put many miles on his cars, visiting prospective clients, when he was not supervising an active construction site. He spent almost all of his time on the road. Dad recalls that he and his mother were home alone during those years, while his brother Dick was in Korea and his sister Audrey was married. We have a few pictures of Dad with both of his parents, but they were taken at a job site. The sales part of Grandpa’s job took much more effort than I had ever imagined.

For a closer look at the Mayer-Osborn plans for Wauneta, Neb., and the final outcome of their efforts, stay tuned.