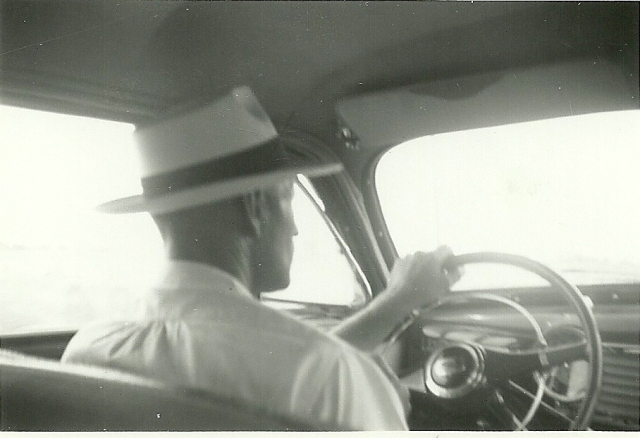 William Osborn at the wheel. Much of his time was spent selling elevators to prospective buyers.

The Mayer-Osborn Construction Company built their elevators from 1949 until about 1955. To do this, they had to beat out a number of formidable competitors, both large and small, vying for the same jobs. But they did not win the contract every time they tried. One example of their perseverance survives at the Frenchman Valley Co-op at Wauneta, a town in southwestern Nebraska. Mayer-Osborn did not win their bid, but their contract proposals, made over a period of several years, are still kept in the co-op vault among blueprints and records spanning almost 70 years.

The cover letter for the Mayer-Osborn contract proposal at Wauneta, Neb.

When I was first trying to get a handle on the scope of Mayer-Osborn’s business, I asked my dad, Jerry Osborn, which partner did most of the marketing. I was under the mistaken impression that Eugene Mayer was in charge of all that, and I thought that all my grandfather William Osborn had to do was show up and start pouring concrete.

“No,” Dad said, “Gene Mayer took care of the office and accounting, but your grandpa did a lot of the sales.”

This ad for Mayer-Osborn Company ran in Farmers’ Elevator Guide over a period of several years in the early 1950s.

Grandpa put many miles on his cars, visiting prospective clients, when he was not supervising an active construction site. He spent almost all of his time on the road. Dad recalls that he and his mother were home alone during those years, while his brother Dick was in Korea and his sister Audrey was married. We have a few pictures of Dad with both of his parents, but they were taken at a job site. The sales part of Grandpa’s job took much more effort than I had ever imagined.

For a closer look at the Mayer-Osborn plans for Wauneta, Neb., and the final outcome of their efforts, stay tuned. 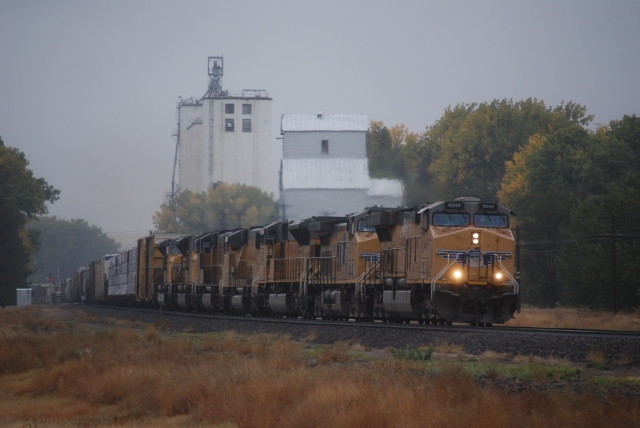 A Union Pacific train rolls by the elevators in Lodgepole, Neb.

A beautiful elevator can be truly inspiring. My first visit to Lodgepole, Neb., was on a hazy October day, on the way to Wyoming, where we hunt elk. The misty skies did not show the elevator to its greatest advantage, so the best photography had to wait for a later visit. But this time I had the chance to visit the office and learn more about the elevator and the town.

Melvin Paulsen inside the elevator driveway during corn transfer.

Melvin Paulsen, a two-year employee of the Frenchman Valley Coop, hailing from Julesburg, Colo., kindly showed me inside the main elevator. The interior lacked the embossed manhole covers that would reveal the builder, J. H. Tillotson, Contractor, but we knew the origins of this elevator from the recollections of my father Jerry Osborn.

The Denver-based builder had lost its owner, Joe Tillotson, and superintendent, Bill Morris, in separate traffic accidents during construction at Lodgepole. The mishaps ended a successful run of elevator projects. My grandfather, William Osborn, soon picked up the pieces and started his own company, Mayer-Osborn Construction Company, also based in Denver.

Melvin explained that the elevator was in the process of shifting grain from a main bin to the annex. The grain dryer attached to the elevator was no longer operational, so only grain that was sufficiently dry (with 18 percent or less original moisture content) could be accepted for storage. Grain that was on the moist end of the acceptable range had to go to the annex, which had ventilation fans, to prevent damage from overheating.

A fair pile of dust could accumulate during the grain transfer, so the elevator driveway was kept open to help blow it out. A shovel leaned nearby to take care of the remainder. Dust had to be cleared out completely to prevent an explosive hazard.

Inside the Frenchman Valley Coop office was an old aerial photo of the elevator and one that was taken during its construction. Melvin kindly furnished me with an extra copy of the aerial shot. The elevator looked very much like its J. H. Tillotson brethren.

Lodgepole celebrates Old Settlers’ Days each year. The park alongside the railroad tracks fills with horses and buggies, tractors, vendors, and all manner of activities. A parade winds along the streets. The scene recalls a time when a farmer would drive his wagon up to the old wooden elevator on the rail line, and dump his grain in the pit, hoping for higher prices.

The town also attracts visitors when the old Union Pacific steam engine, UP844, stops on a regular scheduled visit.

Lodgepole’s elevator was a milestone in my grandfather’s building career. It remains one of the most attractive elevators in Nebraska.