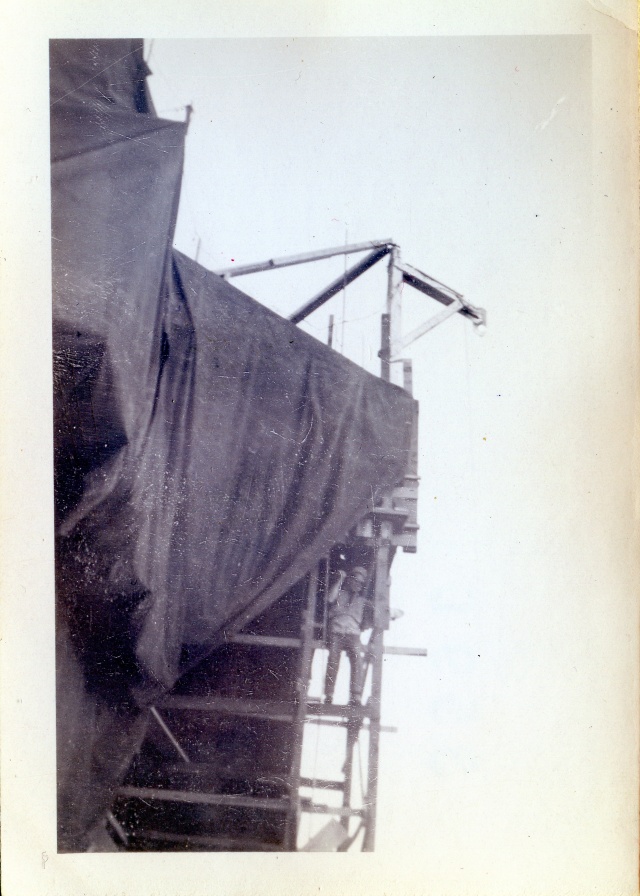 This photo, provided by Kristen Cart from Osborn family archives, shows a deckhand standing nonchalantly on elevator formwork. Kristen believes the picture may have been taken in Giddings, Texas, when Tillotson Construction Co. built there in 1945.

Reinforced-concrete grain elevators used the slip-form method of construction, whereby a wooden form system was built on the ground, having the footprint required to configure the grain-storage tanks.

Once the forms were in place and the vertical lifting and jacking system assembled, laborers began installing rebar and pouring cement into these forms.

When the forms were filled to the top–about four feet–the lifting and slipping commenced by turning screw jacks placed strategically throughout the formwork. After this procedure of vertical form lifting and rebar setting and cement pouring began, it never stopped until the structure reached its intended height, usually between 100 and 120 feet.

This process was the intended norm but was oftentimes interrupted by a myriad of problems, which caused the form-slipping to come to a halt. One of these instances occurred one night when I was eighteen or nineteen, working as a deckhand in Albert City, Iowa, for the family’s construction company.

The structure had reached about eighty feet in height when the electrical power supplying the lighting system and other machinery was cut off by a huge summer storm distributing lots of rain and wind throughout the area.

All personnel, including myself, were stranded on the stationary deck with little else to do but wait out the storm and the return of power.

A few hours of waiting produced a carload of my friends that had arrived on the surface. They were yelling for me to come down and join them. The only possible way to get off the tower was the vertical “ship’s ladder” that was installed in sections on the side of the rising structure.

Access to this emergency ladder was gained by going over the side of the formwork to the finishing scaffold below. Here, a rope was suspended down to the uppermost section of the ship’s ladder. The length of the rope was normally long enough so that a person could slide down it and gain hold of the ladder’s top rung.

I say normally the rope was long enough, based on the fact that the ladder sections were routinely placed sufficient to keep pace with the ever-vertical movement of the concrete structure.

However, as I soon discovered on this particular stormy night, the norm didn’t prevail. I hopped over the side of the formwork and reached for the rope hanging from the finishing scaffold’s frames. It was pitch black, and the wind was blowing to go along with heavy rain, but I was able to find the rope and swing off the side.

The first thing I discovered was that the wind was so strong, it blew me sideways and shoved me around the bin tank.

When the gusting stopped, I was able to line up vertically above the supposed location of the ship’s ladder.

So, undeterred, I slid down the rope—but not very far before another gust of wind blew. I had to stop sliding down and let it subside.

This process went on for a number of iterations, and as I slowly went down the rope, I began to wonder where the top of the ladder was exactly.

I was running out of rope.

With about three feet left, I really started sweating–I still couldn’t see the top of the ladder.

Because I had become somewhat exhausted while sliding down, swinging back and forth like a teabag, I knew I couldn’t crawl back up to the scaffold.

Now I reached the very end of the rope, and a big blast of wind blew me away and around the tank. When that gust stopped, I flew back around and by sheer luck found purchase with my foot on the top rung of the ladder. Another blast hit me, but with my foot hooked under the top rung, I stabilized myself.

With my strength ebbing, if I was going to survive, I had to make an attempt to release the rope, drop down along the ladder, and catch a rung. (Any rung would do.) So, with trepid emotions, I let go of the rope and dropped.

The testimony of my luck (and strength and skill of course) is that I am able today to relate this harrowing story.

As I released the rope I yelled up to the top of the tower to alert other personnel that they shouldn’t attempt to do what I had done. I’m sure I saved someone else’s life besides my own that night.

But the message of this story is that constructing grain elevators in the early days was filled with these types of unsafe conditions where protection of life was not as important and took a back seat to getting the job done.

There was grain being harvested in the fields, and it needed a place to be stored. The nation was on the upswing, growing by leaps and bounds, and in need of being fed.

Leave a Reply to In 1954, near the boom’s end, Albert City, Iowa, had a gleaming concrete elevator « Our Grandfathers' Grain Elevators Cancel reply