Speaking to my Uncle Tim about the airplanes used for business travel in the years after World War Two by my grandfather, Reginald Oscar Tillotson, led me to make a cartoon of one of them, called a Stinson Station Wagon. Then my Uncle Chuck wrote the following narrative in response to some questions I had about the airplanes operated by the business and the nature of the company itself. With his response comes the proviso that his recollections may or may not be entirely accurate!

Looking back, Dad was really an adventurous contractor. Way ahead of his time but I guess he was driven to flight because he was worn out from driving. During the early years of his business, driving 100,000 miles a year was the norm. 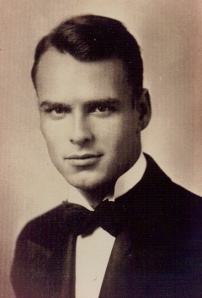 Although Dad took a few flying lessons and probably took the controls while in the air sometimes, he never actually piloted the plane. He had a couple of engineers/salesmen working in the office that got him into flying—both were ex-Air Force pilots. They flew for Dad from time to time but eventually one of them, Marvin Melia, became his full-time pilot. When he wasn’t flying, he was a general overall maintenance/handyman for the business. Dad had double hernias, which I think also prevented him from getting a license. And of course we were glad he couldn’t because of his drinking.

My Grandpa Charles was in the business of constructing wooden grain elevators back in ’20’s thru the late ’30’s. He passed away in 1938 and left the business to his two sons and daughter Mary. The boys, Joe and Mike, (nickname for R.O.) were already working in the business, and shortly before Grandpa Charles died the company started experimenting with constructing grain elevators using reinforced concrete via a method called slip-forming. This method allowed a contractor to build a concrete storage building very fast, which not only provided a more substantial structure but also far more grain storage capacity than the smaller wooden elevators.

After the war, the increase in production of corn, wheat, sorghum, rice, etc., caused the NEED for huge amounts of grain storage, which was virtually non-existent save the old wooden ones. So Dad, Joe, and Mary took off building concrete grain storage, and their business exploded. Many of the grain elevators that you see as you travel the grain belt—from Calgary, Alberta, to Brownsville, Texas, and from Colorado to Illinois, and even some southern states as far east as South Carolina (rice storage)—were built by Tillotson Construction & Development.

Shortly after the war, my Dad and Joe decided they couldn’t see eye to eye, so they split. Joe moved to Denver to form his own company and Mary remained with Dad in Omaha. As the business grew, the company took on a few employees, including the pilot types, and developed a cadre of field superintendents to handle the construction work. Dad was the initiator of the contracts. His job was to sell, sell, sell. Hence, the 100,000 miles per year of road travel. During the war years, synthetic tires were all you could obtain and of course they weren’t as good as rubber, so Dad went through many tires in those days. He used to come home with a trunk full of casings for retreading and at least one dog, which kept him company during the long hours of driving. He also came home with turtles, tarantulas, cats, shrimp on dry ice, and other sundry items that we got to consume or take care of!

Anyway, between 1940 and 1957, Dad built out hundreds, maybe thousands of elevators. I have no way of knowing how many nor exactly their locations other than to point you to the Midwestern Plains and look for the tall concrete storage tanks. Acquiring a plane was an obvious step. It provided him with faster travel, exacted less wear and tear on his body, and enabled him to spend more time at home.

When I went back for my 55th high school class reunion, we were invited out to some friends’ home in Gretna, and we drove from Omaha out the old highway, U.S. Route 6, to get there. On the way, I stopped and paid homage to Dad and my aunt in three little towns (spots in the road) where they had built. They didn’t build much in Nebraska, but in Iowa, Kansas, Oklahoma, and Texas they built one in every little farm town where a grain crop was produced. Of course, as the years passed, they had competition, some of which came from men who spun off from Dad—so he wasn’t the only company out there building these units.

By the late ’50s, the need to build more capacity began to diminish and his business started to decline, and it was the end of an era for Tillotson Construction & Development. Dad passed away in 1960 at the early age of 51. He had literally worked and drank and smoked himself to death. I didn’t appreciate all that he did for us kids until much later in life, but to do today what Dad did would be next to impossible with all the government/environmental/safety controls and taxation that now exist.