The Mid Kansas Cooperative elevator at Walton, Kan., produced a new acquaintance and the offer to return.

An elevator trip sometimes begs for a detour. While driving along the secondary roads that follow the rail lines connecting our grandfathers’ elevators, sometimes I see an intriguing elevator that doesn’t quite look like a Tillotson or Mayer-Osborn structure, but needs to be investigated anyway. Curiosity always wins the day.

Both Waverly, Neb., and Walton, Kan., have elevators unlike those our grandfathers built. I met with employees at both elevators and came away impressed. The people working at these co-ops come from the countryside, where generations of my family farmed, so their stories resonate with a deep familiarity.

Waverly, Neb., has two elevator complexes. The first includes an elevator built by Tillotson Construction of Omaha, Neb., in their trademark style with a curved headhouse. A little further north is an elevator with a partially rounded headhouse which caught my eye. It seemed an oddity, so my mother and I stopped to visit.

Mike Aufenkamp greeted us at the fence as I peered over the gate with my camera. He said the Farmers Cooperative elevator manager was not there, but he was eager to tell us what he knew about the construction of the elevator.

No manhole covers on the outside of the elevator identified the builder, but a single steel plate covering the entry into the pit was embossed “Quad States Const. 1971, Des Moines, IA.” When Farmers Cooperative Company bought the elevator, Mike said they found a pile of discarded rebar in the field behind the elevator. Uh-oh. That could not be good. He said the cooperative had since reinforced the driveway with steel I-beams to prevent problems.

Mike wondered what sparked our interest in elevators, and I told him about my grandfather, William Osborn, and our interest in genealogy that got the whole elevator project going. He laughed and said he’d researched the Aufenkamp family once and found an old cousin in Alaska. Their kinship hadn’t been firmly established yet when the old man died and was flown back to Nebraska for burial, just down the road from Mike’s folks.

“I guess he was my cousin,” Mike said. “There aren’t many Aufenkamps around here.”

An elevator enthusiast and history buff, he directed us to a working wooden elevator in Cook, Neb. He said the Cook elevator was one of the few wooden elevators that kept up its certification. He also mentioned an intriguing set of elevator ledgers, dating from the 1940s, located at Pleasant Prairie, Neb.

Mike exemplifies the kind of sharp, hard working people who work for the co-op. He also likes his job. 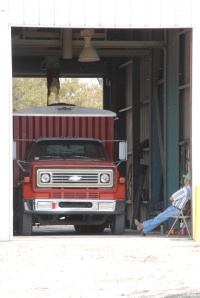 Loading a farm truck with grain at Walton, Kan.

An initial visit and the offer to return

On another trip I had the pleasure of meeting Jeff Snyder, the location manager at Walton, Kan., for Mid Kansas Cooperative (MKC). The elevator was such a beauty I could not drive by it, so when I stopped to investigate which company built it, Jeff came out to meet me. He had a similar infectious enthusiasm for his job.

Jeff came from a military family. His grandfather fought in World War Two, in the 82nd Airborne Division, and was captured by the Germans, spending time in a Nazi prisoner of war camp. Jeff’s father served in the Air Force as a fighter pilot, flying F-105s, F-4s, and F-16s. Naturally, when it came his turn, Jeff also served his country. He joined the Navy and became a Navy swimmer. He mentioned that on September 11, 2001, he was aboard the USS Pearl Harbor, LSD-52, an amphibious warship.

When he left the service, he came home and worked for local law enforcement, a job he did not enjoy. So he changed careers, and has worked for Mid Kansas Cooperative ever since. It is a happy arrangement.

The Walton elevator was built in 1958 by Chalmers and Borton Construction Company, and Mel Jarvis Construction finished the first annex in 1961. Another annex was built later on. Jeff told me about MKC’s wooden elevator in Benton, Kan., and said I should visit. While on a layover in Wichita a few weeks later, I did just that. Jeff also said I should come back on a weekend and tour the Walton elevator.

That is an offer too good to refuse.