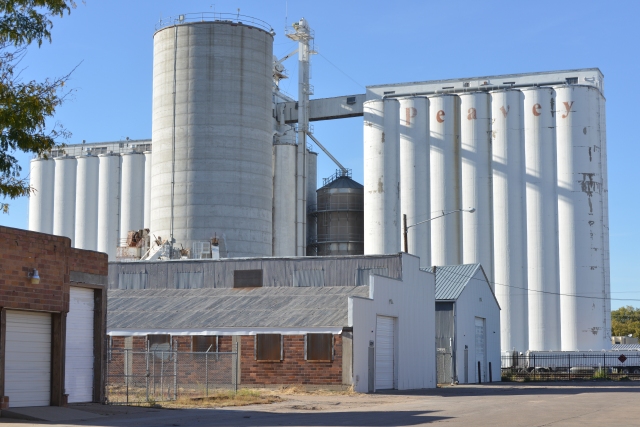 Sometimes it is instructive to visit an elevator built by one of the competitors of the Tillotson Construction Company of Omaha, Neb., and its offshoots, J. H. Tillotson, Contractor, of Denver, Colo., and Mayer-Osborn Construction, also based in Denver. The elevator built by Johnson-Sampson in Grand Island, Neb. is a good example, for comparison, of a project built by the competition while our grandfathers were active in the business.

One of our readers, Teresa Toland, mentioned the elevator and hoped that we knew something about it, since her father, Darrell Greenlee, had supervised its construction. A couple of years passed before I could follow up on her query. While traveling this fall, I took a detour to see the elevator and take photos. The old grain elevator stands now as a prominent Grand Island landmark, still serving its original purpose. It’s location, just off I-80 in central Neb., made it easy to visit.

The elevator hummed with activity at the height of harvest. On this trip, my dad, Jerry Osborn, was along, so I did not take time to interview the employees–we were all tired after our hunting trip, and were ready to get home. But the elevator was a lovely sight and I was glad for the chance to see it. 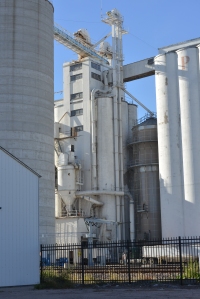 The original elevator, flanked by two annexes, was obscured behind a large modern concrete bin, so I got closer for a better look. The headhouse was unlike any I had ever seen. The elevator’s design formed a harmonious whole, much like the attractive Tillotson elevators its builder emulated, but it had taken a different direction and had its own look. It must have been a handsome sight when it stood alone, brand new, and gleaming white–the tallest thing around.

The bin arrangement for the old elevator seemed conventional for storage in the 250,000-bushel class. Adjacent to the main house stood a large capacity metal grain dryer. Including the annexes, the elevator complex was the size of a moderate terminal–the type of storage that would serve as a transit point for a rail or trucking hub.

When Virgil Johnson, an early employee of Tillotson Construction, went out on his own, he built elevators in partnership with his Sampson in-laws for a few years. Darrell Greenlee, who supervised the construction at Grand Island, was one of his superintendents. 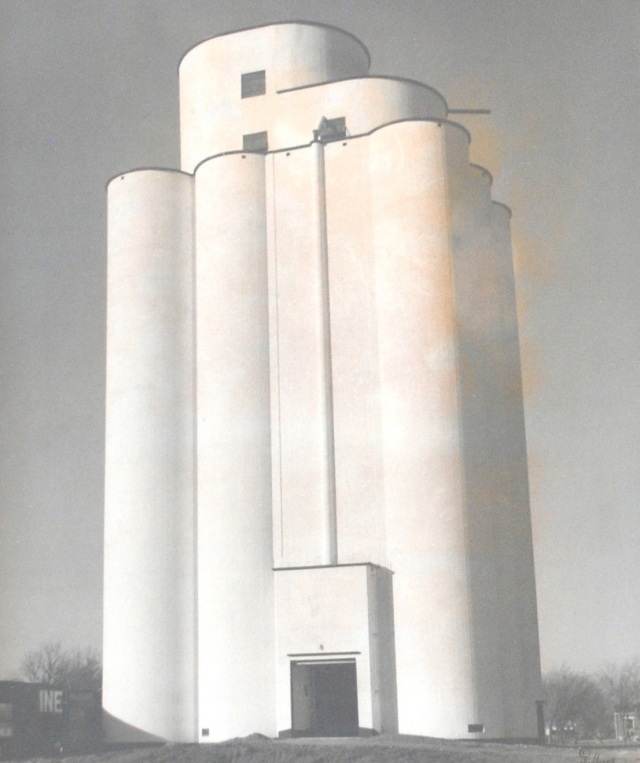 Once again, one of our readers has supplied a fascinating glimpse into the construction of an elevator.

Emily Frank is the granddaughter of Darrell Greenlee, a foreman for Johnson and Johnson-Sampson. She related a story about the beginnings of the Galatia, Kan., grain elevator:

My grandfather built slipform concrete grain elevators while my mom was little. My grandparents moved around every three to six months from the time they were married until my mom (the third of six children) was in third grade. I find a lot of your stories remind me of the ones my mom told or my grandmother tells. You did one where a man fell to his death from an elevator during construction. Unfortunately that happened on a job where my grandfather was the foreman, as well…

My grandfather worked for Virgil Johnson. At the time the company was Johnson Elevator Company.

At a job in Galatia, Kan., in 1959, while Darrell was stabilizing the family trailer, it fell and he was hit across his back and shoulders. Rosina took him to the hospital. The hospital wasn’t going to see him until she could pay. She didn’t have insurance. She told them instead, “I’ve got enough money to buy this damn hospital.” When they left two days later, she paid cash.

Rosina called Virgil to tell him that Darrell had been hurt–not bad but he was pretty bruised up. Rosina wasn’t sure what they were going to do. She told Virgil she wanted to know what he was going to do because if Darrell didn’t work, he didn’t get paid. Virgil asked if his butt was bruised and then pointed to a chair and said “See that chair right there, he can park his ass right there and supervise from his chair.”

When the elevator was just about completed a man fell from the top of the elevator. Darrell was a witness to the fall. The guy opened the door at the top and the wind caught him and blew him over the side of the elevator. He fell 120 feet to his death. The man was Arthur Kronberg, 42, originally from Menasha, Wisconsin.

Rosina said when they called the man’s brother to tell him he could come pick up his belongings, he didn’t seem very interested, except he asked if there was anything of value. They had told him his brother had a truck. The man reluctantly agreed to get the truck.

Emily filled in some of the details of her grandfather’s career. The history of Johnson Elevator Company that she shared intrigued us, because the company took up where Mayer-Osborn Company left off and built strikingly similar elevators. The Galatia elevator is a close copy of the Mayer-Osborn elevators at McCook, Neb., and Blencoe, Iowa. Because of the similarities between them and a number of other Johnson elevators, we have speculated whether designer Gene Mayer continued his career with Virgil Johnson and brought his designs with him. Emily continued: 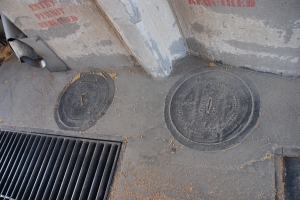 The elevator at Galatia is on one of Johnson’s business cards.

Johnson used to work with some brothers with the last name Sampson. They were Virgil Johnson’s brothers-in-law. They worked together for a while, too, under the name Johnson-Sampson.

My grandfather worked constructing concrete elevators from 1947 to about 1963. He worked for several different people. 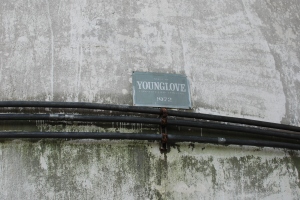 When Virgil went broke after a missile base job in the 1960s, my grandfather worked for a guy by the name of Guy James. He did two jobs for him until he finally settled in Rushville, Ill. He never built another elevator, but he had his own company and they did a lot of elevator repair work.

My own grandfather William Osborn’s experience followed a similar trajectory–after he was done with elevator construction, he went on to elevator repair and maintenance. We always attributed the cancer that took him at age 75 to the dust he breathed during those years, though some of the damage could have been from smoking, a habit he dropped ten years before he died.

The hazards of the business were sometimes obvious, but often stealthy and unexpected. From dust, to wind, to new boots, to heedless roofers, many things in elevator construction took lives–but the monuments built by these mortal men remain, withstanding tornadoes, floods, hail, and every natural disaster.

Heat waves rising over a field of winter wheat in Goodland, Kan. Photo by Kristen Cart.

Here is Agriculture 101. I will tell you something about wheat.

There are different types of winter and spring wheat. Some will produce better yields under normal growing conditions.

Our Colorado wheat fields that were just harvested will not be planted again until August 2013. Farmers leave the field idle for a year. This is done to keep the moisture in the ground, and to preserve some of the minerals for growing. Here in Colorado, it is called dry farming. When they get ready to plant, they will plant the wheat into the ground, without breaking it up. 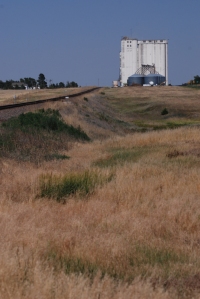 A view, two days before harvest, of the Page City, Kan., elevator, built by Johnson-Sampson Construction, of Salina.
Photo by Kristen Cart

Where I was reared, in Kansas, it was wet farming.  We had enough moisture, between the rain and snow. Farmers would use a plow, and plow under the last crop remains, then go back over the field with a harrow, leveling out the ground. Then they would come in with a planter and put the seeds into the ground.

In Colorado, we cannot do this, as we do not have the moisture.

Those are just a few basic things about wheat. 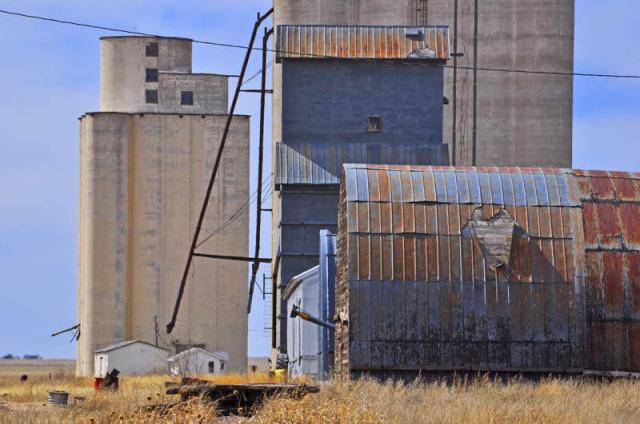 We’re trying to track down the builders of elevators that stand in various places throughout Kansas and Colorado.

They could be Mayer-Osborn Company elevators.

Here are photos of elevators in Pritchett, Colo., above; Limon, Colo., center; and Coldwater, Kan., below.

Brandon, Colo., also has an elevator whose builder we haven’t identified. 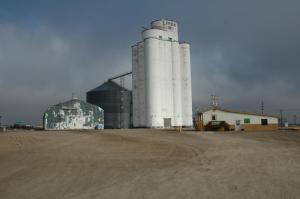 From Salina, Bridgeport is due south while Carlton is to the southeast. Peabody is on U.S 50 northeast of Newton.

There are elevators in a few places that were certainly built by Johnson-Sampson. These in Atlanta, Galatia, and Fowler are of the step-up type.

Although circumstances around the dissolution of Mayer-Osborn in 1955 aren’t precisely known, we think that after William Osborn left the business, Eugene Mayer, his partner, carried on under another name, and the signature Mayer-Osborn design scheme was used by Johnson-Sampson and perhaps others. 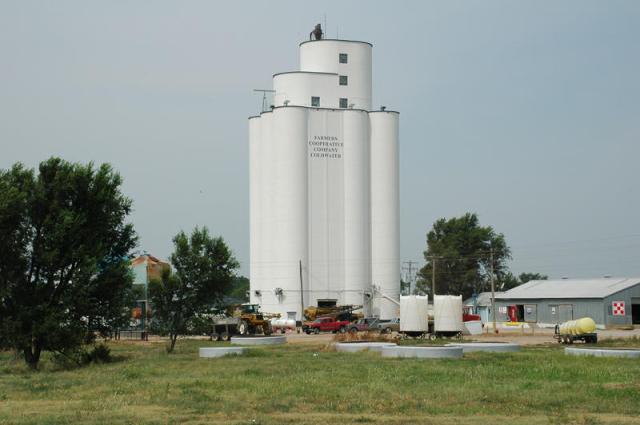 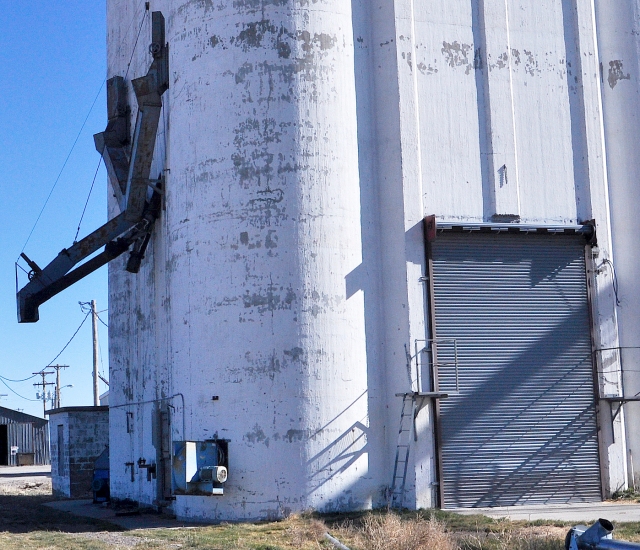 Story and photos by Gary Rich

The elevators without a headhouse were called straight-up elevators. J. H. Tillotson, Contractor and Mayer-Osborn Company produced these in the latter 1940s and early 1950s. Their elevators had a smaller diameter pipe that came out about three-quarters up the rail side. Loading a boxcar was time-consuming.

About 1958, there were improvements added for quicker loading of boxcars. These images show the Page City, Kan., elevator. Notice the rail loading chutes are much larger and there are two chutes, so the grain could be loaded equally. These chutes were on all concrete elevators raised during the late 1950s and 1960s. Most boxcars could be loaded within fifteen minutes, whereas on the old wooden elevators it could take up forty-five minutes.

The Page City elevator was built by Johnson-Sampson Construction Company, of Salina, Kan.  It was built about 1958 or 1959. Did Gene Mayer draw up the blueprints for this elevator? We don’t know where he went after the Mayer-Osborn era, which ended after 1955.

Another improvement is the area around the driveway. You can see the three reinforcing columns above the driveway and door. I would think this would add greater strength. The Kanorado, Kan., elevator has a smaller version built out. It is established that Gene Mayer produced the plans for that elevator. 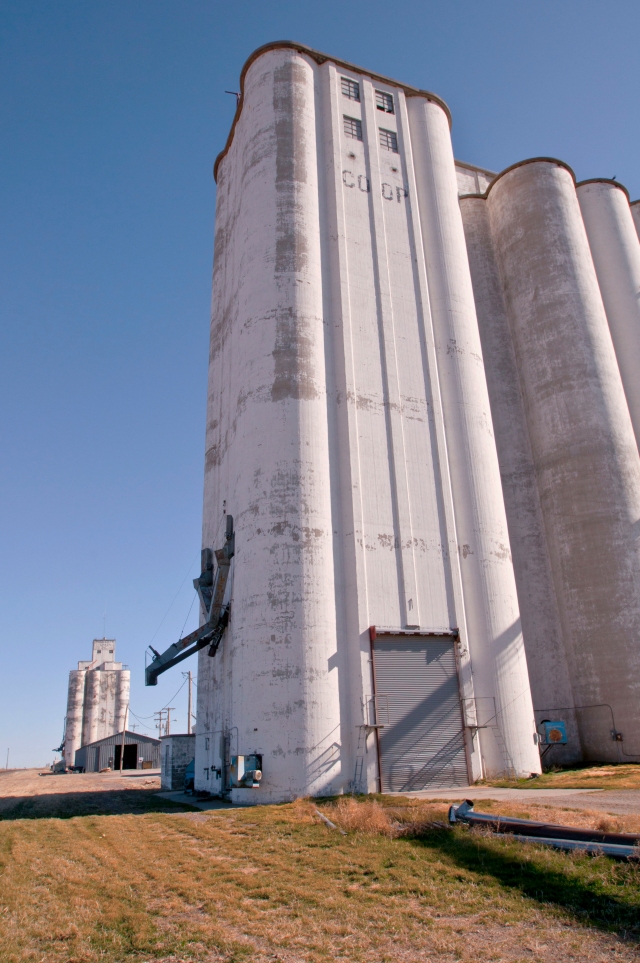