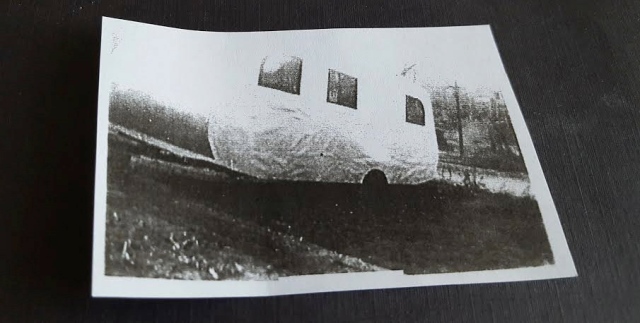 The topic of staying in a travel trailer while working at grain elevator construction sites has prompted Charles J. Tillotson (“Uncle Chuck”) to do some reminiscing and dig through his archive of photos.

The first one is a photo of the last trailer Dad built in 1937, which was an upgrade to the one that your mom and I are standing in the doorway of. He had covered the exterior of this trailer with some kind of protective fabric, which doesn’t seem to be attached very well.

The previous trailer had an exposed plywood exterior that was either stained or painted and it evidently didn’t hold up. The focus should be on the small size of the trailers which were probably about 15 feet long, much like the size of the early camper trailers of the 1950s and 1960s. If you allow room for the stove, toilet, closet and even a fold-down tabletop with a little settee, where did we all sleep?

The photo [below] was taken in late summer in Albert City, Iowa, and shows my Dad and me standing along side of my 1953 Ford with another older gentleman who I assume was the Albert City superintendent packing something into the trunk. We had finished up our work on Albert City, and Dad had assigned the three of us to travel across the state to a job he was starting in Clinton, Iowa. 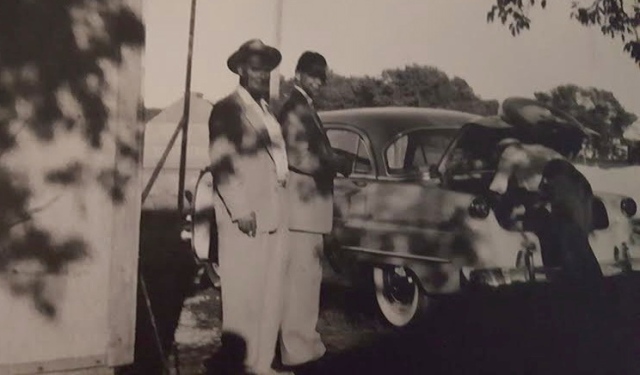 Soon after the photo was taken we three boys [Chuck, Tim, and Mike] left Albert City and took along with us a couple of men who wanted to continue working for Tillotson Co. We took off in my beautiful ’53 Ford, which I had modified with a two-tone paint job, a Continental fake-spare-tire kit (remember those?) and lowering blocks among other things. I was driving very fast and in a pattern learned from my Dad, taking short cuts via the old one-mile graveled country roads through the tall cornfields. Zooming along and approaching an intersection ahead I spotted a dust trail from a vehicle approaching the same intersection on my right. With the road being gravel I decided that rather than stop for the oncoming vehicle (that had the right of way) to instead outrun it.

I had almost made it through the intersection when the oncoming vehicle clipped my rear bumper and put me into a sideways spin. I countered the spin by yanking the wheel in the opposite direction which brought me out of the spin, but the action was so fast it put me into another spin in the opposite direction. We zigzagged back and forth for a bit and eventually headed into a huge irrigation ditch, which we entered, rolled over, and flipped upside down. I remember my bro Mike standing up in the back seat hollering at me to ‘straighten out the car’ but to no avail. I think there were five of us in the car including my bros, none of which had seat belts fastened but by some miraculous ending, we were all able to crawl out of the car without a scratch.

The farmer who hit me was a local fellow, and he rounded up a tractor with an operator and the car was pulled back upright and out of the ditch, whereby it was towed off to a local mechanic’s shop.

I don’t remember who came to rescue us, but somehow we continued on to the Clinton job where we put in some closing days of the summer, laboring there. 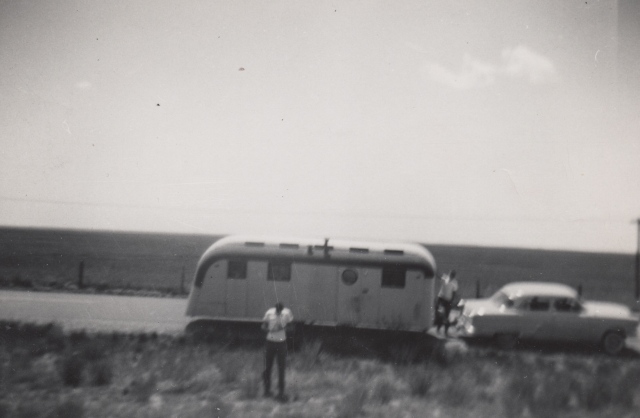 When it came time to go home, my bro Tim and I went and picked up the Ford which still was operable (a testimonial to Ford), but the vehicle had multiple dents and bruises including missing a windshield which had been knocked out in the crash.

Tim and I bought a pair of goggles and proceeded to hit the trail (in a light drizzle) to Omaha with the wind and rain in our hair and elsewhere. My Dad knew of the accident but he had never seen the car until we got home whereby he came out of the house and I’m sure almost had a heart attack when he viewed the pile of junk that once was my beautiful ’53 Ford. As I recall, he had the car towed away to the junk yard.

It’s funny how viewing old photos can bring back memories of both the exciting and dull days gone by. It’s too bad the photographs taken today are no longer hard-copied by most people and their memories no longer documented to tell the stories of days gone by for both their own revisitation as well as their offspring.