In 1971 a monstrous tornado just missed Gruver, Tex., veering away from the town at the last minute.

The funnel cloud was as great as two miles wide, and we can’t help wondering what would have happened if a direct strike had engulfed the town of 1,100 souls and its fine Tillotson elevator.

Besides breaking windows, ripping out doors, twisting spouts and ladders and sending them flying, the tornado might have played hell with some of the elevatotr’s internals as they became exposed.

The reinforced-concrete structure would have looked tattered, but it might well have withstood the fierce storm. Anyone sheltering in the basement would have been rattled but OK.

Records kept by Tillotson Construction Co. reveal this single-leg elevator was built in 1947 and was, as a note says, “Similar to Satanta (but 125′ D.F. walls).”

That’s the Kansas town where Tillotson built earlier the same year. To decode that sentence: Satanta is a town 100 miles away in southwestern Kansas; D.F. stands for drawform, and Satanta’s silos were 120 feet high.

Both elevators succeeded from the Dike, Iowa, plan of 1946.

The basics are that this 265,000-bushel elevator had eight tanks, or silos, of 18 feet in diameter–two feet less than Tillotson would later offer as the standard dimension.

Gruver had an extra attached driveway, a hopper scale in the cupola, and double distribution floors. 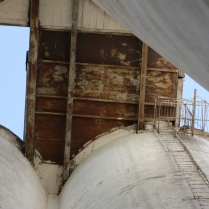 Steel used for reinforcing the concrete amounted to 107.50 (including the amount used for jack rods).

The 21-inch-thick main slab sprawled over an area measuring 57 x 69.5 feet. The records say that amounted to 3,754 square feet “outside on ground.” Again, as with other Texas elevators, we get 3,961.5 square feet and can’t account for the difference.

If the tornado bumped against the elevator, it would have realized this structure had 4,251 tons of reinforced concrete and weighed 12,351 tons when fully loaded. The confrontation would have been interesting. 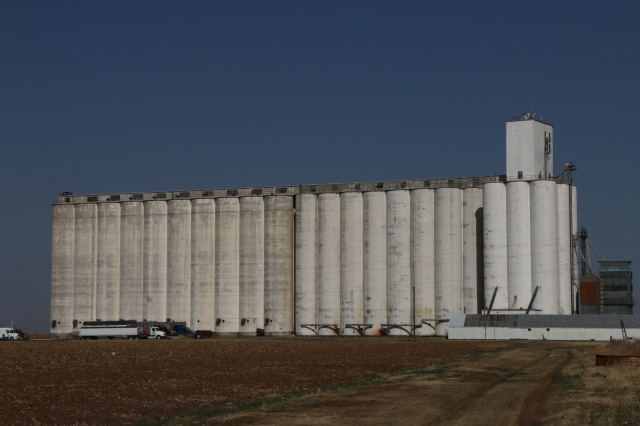 After 71 years, this Tillotson elevator appeared to be in good working condition and maybe even ready to take on the next monster storm that approached Gruver.

2 comments on “Could Tillotson’s elevator in Gruver, Tex., have taken on the monster tornado of ’71?”