Tillotson Construction Company completed the original 382,880-bushel elevator in 1950. Extensive annexes were later added. We don’t know when operations ceased, but for the last eight years the elevator on five acres of land has been co-owned by Ron Safarik and Richard Brock, who attempted to make a climbing facility comparable to those established at old elevators in Bloomington, Ill., and Oklahoma City.

In 2012, the Vinton Street elevator received national attention after the annexes served as the canvas for a public art project; a nonprofit organization commissioned artists to create themed banners that were draped over the silos.

Reached by phone, Safarik said he and Brock have tried to secure the property, but intruders found a way to pry through and gain access to the top. “I would presume they used the internal ladders that still exist,” he said. 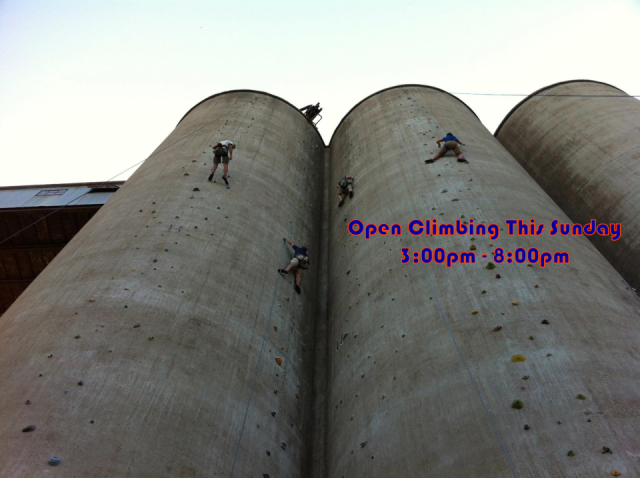 Safarik and Brock will now be stuck with the cleanup bill. Since SILO Extreme Outdoor Adventures, the partners’ venture, closed in 2013, the elevator has been a burden, he said.

It has been listed for sale since 2014. A post on SILO’s Facebook page says, “The Silos and the 5 acres of industrial land are for sale through Ben Pearson at World Group Commercial Real Estate. Any climbing related buyer will receive the holds, bolts, and supporting gear for starting up a climbing club or business.”

Although he said he hadn’t known much of the elevator’s history, he did pass along a story heard from an elderly man named Otto, who lived on Vinton Street and “had intricate knowledge” of events.

According to Otto, the only death that occurred at the elevator happened on a freezing night in an unspecified year. The victim, an elevator employee, locked himself out of the scale house. As he tried to pry back into it, he jammed his arm and couldn’t pull free. Found dead in the morning, he was surrounded by cigarette butts. With his free hand, he had managed to smoke his remaining cigarettes before he froze.