The concrete elevator construction records of the Tillotson Construction Company display data in columns, each column headed with the location of the project, and the date it was built. Specifications follow. Above the header is the name of the plan used to build the elevator. A short description accompanies the plan name.

You might discover, on review, how many of each elevator type were built based upon the plan names. This exercise will show us how the elevator plans evolved, and which were successful over the years of the elevator boom. Over the next few posts, I will attempt to spot trends over the span of our records, starting at the beginning. The elevators will be referenced by their locations.

Goltry, the first elevator of its type, was built with a center drive and four 12-foot-diameter tanks. The Goltry plan specified an elevator in the 60,000-bushel class, the smallest Tillotson built:

From the photographs we were able to find, this elevator type was a small, four-square design with a rectilinear headhouse. Several of the type were still standing in recent photographs.

Medford, the first elevator of its type, was built with a center drive, a cross work room, and 22 tanks of 15 1/2 feet in diameter. These old elevators had rectilinear headhouses, a feature that was later abandoned in favor of a rounded design. The plan represented a big jump in size from Goltry, having a 212,000-bushel capacity. Later, a revised Medford plan had a capacity of 140,000 bushels, and an expanded plan pushed the capacity to 240,000 bushels:

The two daughters of the Medford plan, Manchester and Kingfisher, follow: 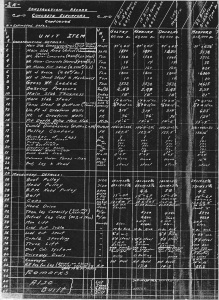 More analysis is needed to determine exactly when the transition to a rounded headhouse occurred–but we think it did occur sometime after the Manchester plan was first designated as such, unless some of these elevators were modified at a later date.

What is clear from photos of Goltry and Medford plan elevators is that the rounded headhouse design was not used in Tillotson’s earliest elevators, and was likely adopted sometime in 1948–both plans made the transition in that year. Other details are bound to emerge as we study the other elevator plan types as they entered the Tillotson Company’s repertoire.