My uncles have said Tillotson Construction Company built elevators in a swath extending from Alberta, Canada, to the southeastern United States. Records show activity in Estill, S.C. and Millet Ville [sic], S.C., for example, but we haven’t seen anything to substantiate the claim about Alberta.

Tillotson was active in North Dakota, though. In 1948, the company built an elevator in Cavalier, N.D. Named for the early settler Charles Cavileer, this town of about 1,300 people–the seat of Pembina County–is located in the extreme northeastern part of the state, about 20 miles from the United States-Canada border.

After finding the elevator on Google Maps, we made a phone call to the CHS, Inc., on Airport Road, in Cavalier. Scott Hansen, who answered, said the complex, pictured above, has capacity for 460,000 bushels, and the old concrete elevator is used for extra space during the harvest.

The record shows it was built on Tillotson’s Sheldon, Iowa, plan with four tanks, each being 14.5 feet in diameter and standing 102 feet tall. Overall capacity was rated at 93,700 bushels.

At 18 inches thick and covering 1,768 square feet, the main slab supported a gross weight as as high as 5,321 tons. Eight bins were overhead in the 12-by-17-foot driveway. 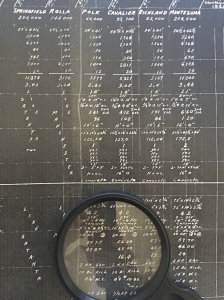 The 14-inch, 6-ply Calumet belt had cups of 12 x 6-inches spaced 10 inches apart. A 20-hp Howell motor supplied the drive in the headhouse. Actual leg capacity was 4500 bushels per hour.

A 2-hp motor operated the man lift. (Lifts in some Tillotson elevators of this era were still hand-operated.)

Cavalier was a fully accessorized elevator, with a 10-bushel load-out scale, an 8-inch load-out spout of 10-gauge steel, and 14-gauge cupola spouting. There was a 7.5-hp truck lift and a dust collection system consisting of a fan, column, and bin.

In the space for remarks at the page’s bottom, we find written, “One end round on cupola.” Yet the photo shows both ends are rounded.

How we would love to know the job’s cost! Alas, a call to the Pembina County historical society revealed that all old copies of the Cavalier Chronicle are out of our reach on microfilm.

One comment on “A Tillotson elevator, fully accessorized when new, remains on call for extra capacity in Cavalier, N.D.”