The following story and photos are reproduced from library copies of the January 1950 edition of Farmers’ Elevator Guide:

Moving quickly to establish itself as the principal district elevator for grain handling, the Farmers Equity Elevator Co. of Montivideo, Minn., has a new 100,000-bushel capacity concrete elevator in full operation after a whirlwind effort to get it built to meet needs of the fall harvest.

When it became apparent that existing facilities in the area left room for a vast expansion to handle grain crops, the Farmers Equity Elevator Company decided to expand its plant which had only 25,000 bushels of capacity.

The project, begun late in August, was rushed to completion by Tillotson Construction Co. of Omaha, Neb, in record time. Concrete pouring by round-the-clock crews was completed in nine days and four hours. This bettered by 18 hours any previous accomplishment for an elevator of this size.

Installed during erection was a $15,000 corn drying plant and, on the midway level, a $10,000 grain cleaning installation. This included a large Crippin sieve machine, a large Superior cleaner, a Slurry grain treater and other equipment.

The new building houses a weighing and sampling room but the offices of the company are in the old quarters.

Sliding tubular forms were used to permit the rapid construction. 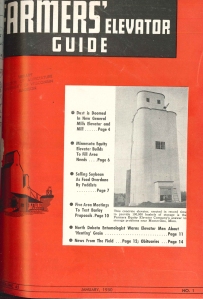 The plant cost $120,000 including $10,000 for piling costs, but other equipment raised the total to $134,000. Features include a 50-ton, 50-foot long scale with lighted dial and printomatic type registering beam. It has two concrete elevating legs each with 30 h.p. head drive and elevating capacity of 5,000 bushels per hour dumping into a Gerber distributing system. Its dump pit has two sections each built under the driveway and extending 12 feet below ground. All bins are hoppered to discharge into pit.

Two large cleaners installed are a Superior cylinder subterminal size machine for coarse grains and a Crippin screen cleaner for flax. All grains will be commercially cleaned before loading out to add profit to operations. The mills can be adjusted for farm seed cleaning in spring months. Gravity is used to feed mills from above and to distribute grain into bins below before loading to cars.