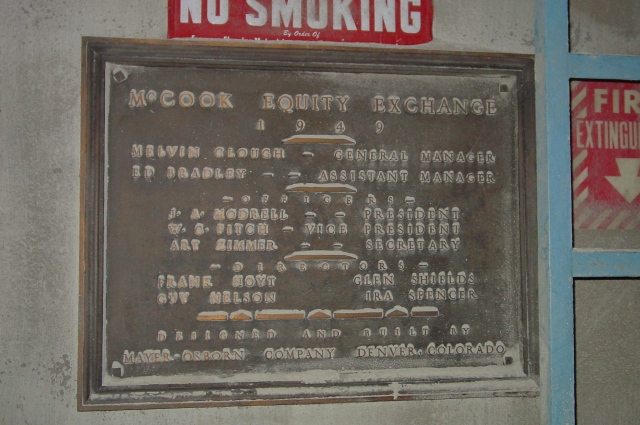 Often a reader will turn our blog in a whole new direction by revealing a facet of the grain business we had not explored. In the case of Horner & Wyatt, an engineering and design firm out of Kansas City, reader David Chatt piqued our interest by asking us to locate some of their work. His grandfather, Oliver Howard Horner, a partner in the company, died  in the late 1930s.  David wanted to know more about the sites he had helped design. The quest seemed to be right up our alley.

It might be possible to discover the identity of the architects at elevator offices, but the common method of checking for the builder’s name on elevator manhole covers would only reveal the guys who poured the concrete. At McCook, Neb., a plaque inside the elevator names the designers. But newspaper accounts, journals, or local histories are the best way to learn about the architects of most elevators, especially for the large projects that changed the face of their communities.

David told us  the Galveston elevator, which was destroyed some years ago, was the only Horner & Wyatt site he could find. Further investigation revealed the company as a major player in elevator architecture, active as early as the 1920s. Our search for their projects revealed a completely different side of grain storage requirements: the end of the logistics trail, or the terminal elevator. We located a few of them, and most appeared to be massive.

Oliver H. Horner was an electrical engineer working for Black & Veach at the time he registered for the draft in 1917. By 1921, he was a partner in his own firm, based in Kansas City. In the 1930s he was engineering some of the biggest elevator projects in the country. He was still listed in that capacity in the city directory as late as 1939. Newspaper accounts described Horner & Wyatt as “consulting engineers” on various projects, which became increasingly complex as time went on.

Some of the sites we found, which were completed during Oliver’s lifetime, were elevators at El Reno, Okla., the Gooch Feed Mill at Lincoln, Neb., and the levee terminal at Kaw Point in Kansas City, Kan. The company continued to design massive elevators into the 1950s at sites such as Happy and Lubbock, Tex., and the port terminal at Corpus Christi, Tex. Doubtless the designs for the later projects built upon the experience and ideas that went before and bore the unmistakable imprint of the company’s earlier engineers.

Oliver H. Horner left a legacy to be proud of, with elevators and mills still standing and operating in premier locations around the country. Horner and Wyatt was one of the top engineering companies working during the twentieth-century elevator boom. It’s very nice that one of our readers took the time to point them out.