“Nice corn” goes straight into storage without a stop in the dryer.

One of the elevators on my list to see was the facility built in Altoona, Iowa by Tillotson Construction Company. It was reported to be the near-twin of the elevator in Mitchellville, Iowa. It is located about a half-mile south of I-80 in Altoona, just east of Des Moines, off an exit prominently marked by a Bass Pro Shops Outdoor World. Its business partner, the Bondurant elevator, stands about a mile away, on the north side of the Interstate. Farmers Cooperative operates both elevators.

Farmers Co-op, instantly recognizable by its trademark “FC”, is the largest Co-op in Iowa with more than sixty locations. It employs four full-time truckers in the local area serving Altoona in addition to the farm trucks that serve the location. 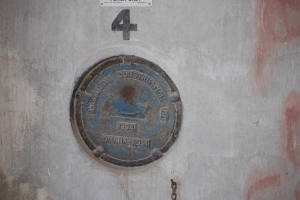 The manhole cover on bin number 4 indicates the builder and year of construction.

The Altoona elevator was built in 1954. The manhole covers, furnished by the Hutchinson Foundry, of Hutchinson, Kan., indicate the builder and the year of construction. Most of the covers are inside the elevator, but there is one also on the outside near the ground, which is typical of Tillotson elevators. A large grain dryer flanks the elevator on the east side. 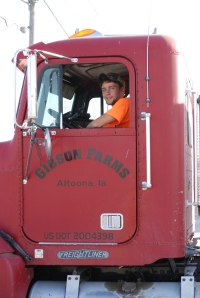 Jacob Holloway, driver for Gibson Farms, paused for a photo after delivering grain.

When I stopped to visit in October, Pat Printy, a thirty-year employee of the Farmers Co-op, shared some of the history of the elevator. He also explained the elevator’s operations during harvest and the significance of good corn.

Sam Wise, former mayor of Altoona, owned the elevator before the cooperative purchased it in 1963 for $175,000. Farmers Co-op began operating the elevator in 1964. About ten years ago, the elevator headhouse had to be rebuilt because of cracking concrete, but it still retains its Tillotson-style rounded contours. The elevator is currently used for beans and corn.

A truck came up to deliver corn while I visited. Pat Printy vacuumed a sample into the building and tested it for moisture content. He placed a scoop of it on the counter for me to see.

Exceptionally wet corn could become a problem because the dryer could only treat 2,500 bushels per hour. Each truck holds about 950 bushels, so during a wet harvest the dryer would become a bottleneck. Pat said the dryer at Altoona was an old one, but the dryer at Bondurant was newer and much faster.

The elevator was busy the day I stopped by, both accepting corn and moving beans out for transfer into the larger Bondurant elevator about a mile away. Ninety-five percent of the bean harvest was already in, and the Altoona elevator needed to make room for some nice, dry corn.

A grain truck driver pointed out that Tillotson Construction Company’s Altoona, Iowa, elevator, seen here, is very similar to another of the company’s creations, which is found in Mitchellville, Iowa.