Farmers line up their grain trucks at St. Francis, Kan.

One of the most pleasant surprises at the St. Francis Mercantile Equity Exchange was their historical record preserved in pictures. In its hundred-year history, the exchange has maintained a continuous presence on the site of the present elevator, and has seen many changes in technology. Fortunately, photos exist that document the old way of doing things, and  Shirley Zweygardt, the site grain manager, was kind enough to provide copies. 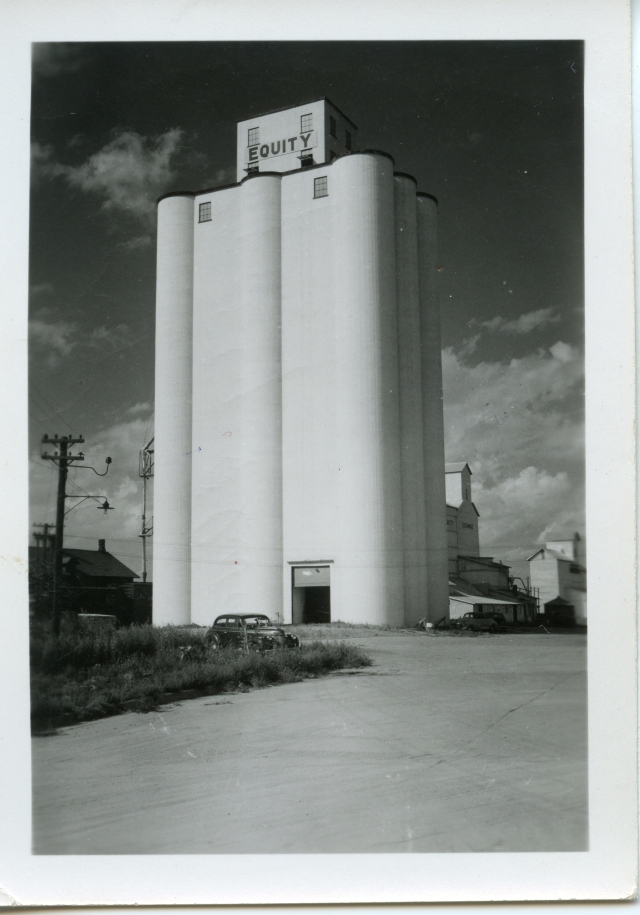 In this photo dated 1951, an old wooden elevator stands immediately behind the concrete house. It was demolished to make room for the second bank of concrete bins, built in 2000.

It is always a fantastic find when you locate a pictorial history of an elevator.

A picture album, filled with historical treasures, which Shirley Zweygardt was pleased to share

I had already acquired a 1947 dated postcard depicting the elevator, so we knew its age. These additional photos, dated on the reverse “1951,” show its stately beauty. They depict two additional wooden elevators, which have long since disappeared. The vintage automobile in the foreground of the first image substantiates the date of the caption. Without the car, this photo would appear timeless, even though it was taken shortly before the addition of the first annex built by Chalmers and Borton.

It was quite a lovely thing; by 1951, the largest known elevator built by J. H. Tillotson, Contractor, was celebrating its fifth year, and was still white and stark against the sky. The elevator at McCook, Neb., was only two years old when this photo was taken, and my grandfather, builder William Osborn, had gone on to other projects with the Mayer-Osborn Construction Company.

Shirley Zweygardt told me an elderly resident of the town had preserved these photos in an album, which she brought to the elevator office, where they became part of the records of the equity exchange. The prints, reproduced here, were duplicate copies, now part of my growing library of historical images.

The visit to St. Francis was a happy one, capping an October 2012 elevator tour. This elevator marked the pinnacle of J. H. Tillotson’s construction career. Impressive still, it is a fitting monument to the skill, ambition, and industry of its builders.

5 comments on “History is preserved in pictures at St. Francis, Kansas”