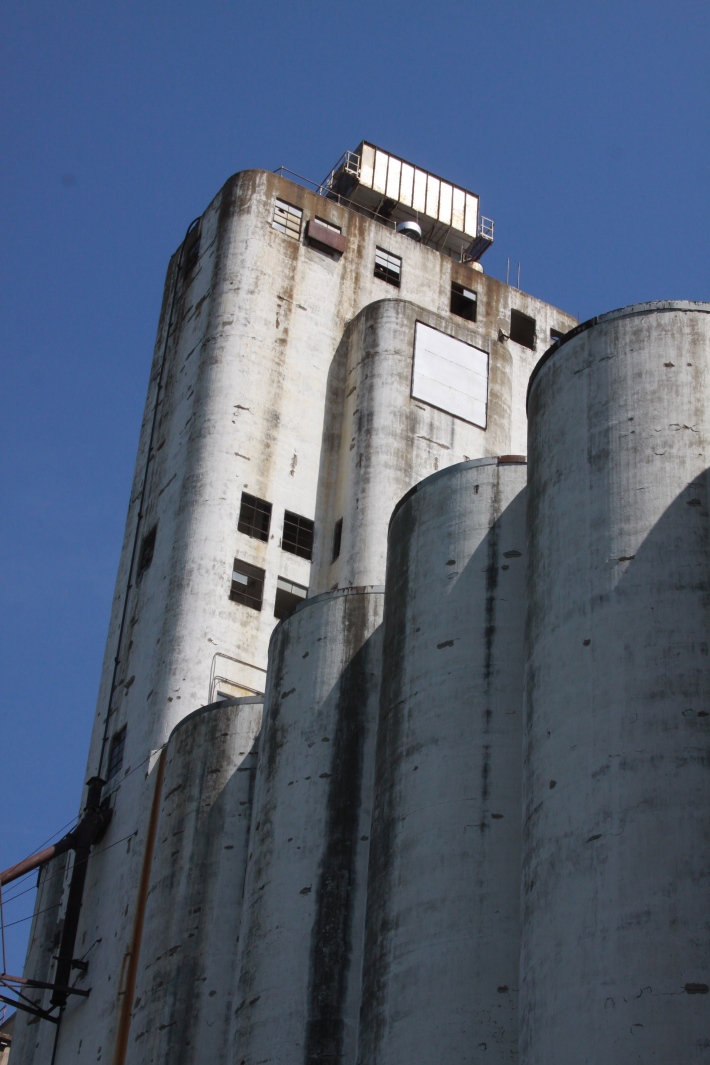 Grain elevator construction brought with it the need for hoists that placed and set mechanical equipment for the grain-moving distribution systems. Most of headhouse mechanicals had to be placed via the use of manual chain hoists, in those days called chain falls.

These hoists consisted of a series of pulley wheels and chains that used leverage for moving heavy equipment up and down in precise increments. The hoist system was often used in conjunction with an overhead track so equipment could be adjusted horizontally as well.

The headhouse mechanicals were first lifted more than 100 feet to the top of the grain tanks using the main construction hoist. Once the equipment reached the top deck, a dolly cart moved each piece to the place of use. Most big pieces were mounted on preset anchor bolts. In order to hoist the equipment over the bolts and into horizontal position, the chain fall was rigged.

My lesson in using the manual chain hoist came one day in 1947 when I was working with an experienced workman named Fred on the Vinton Street job in Omaha. As a twelve- or thirteen-year old carpenter’s apprentice and hod carrier, I had never even been near a chain fall system, but this day I was assigned to help set a grain dryer.

After the rigging was finished, Fred had me guiding the dryer for alignment with the anchor bolts while he yanked the leverage end of the chain fall.

While he operated the vertical location, I nudged the dryer ever so slightly back and forth as it swung above the anchor bolts. To accomplish this feat, I pushed on the chains with my hands placed right above the pulley wheel. When the dryer reached its spot, I hollered to Fred to lower it over the bolts.

Concentrating so much on the dryer’s placement, I neglected to release at the key moment. Consequently, my hand followed the chain into the sheave as Fred lowered the dryer, and my fingers slipped between the chain and wheel.

I yanked my hand back–but not before the tips of my index and middle fingers were crushed, skin and fingernails pulled off, leaving me with bloody stumps. As I was about to collapse from shock, Fred grabbed me, guided me to the man lift, and lowered me to the ground. My destination was the Super’s office, which was previously built for the grain company.

The Super, a rough dude from the old school, took one look at my bleeding fingers and told me to sit down on a chair next to his reference table, which was covered with plans and paperwork. He asked for a minute to get some first aid treatment and then told me to turn my head and look out the office window. I heard him pouring something into a little bowl on the table. He took my hand, saying he would dip my fingers and it might hurt a little.

Well, after he scraped me off of the ceiling, controlled my sobbing, and began resuscitation, I was hurting more than ever. My fingertips felt like they had been burned off! As an antiseptic he had used Merthiolate, administered in those days to treat abrasions and cuts.

Next he wrapped my fingers in gauze and tape. “Keep the bandages on for a few days, and you’ll be as good as new,” he said. It turned out more like six months before my skin and nails miraculously healed to their original appearance.

Of course, through this experience, I gained a valuable lesson in the use of chain falls. Even though such systems today have better safety shields and braking devices, I still shudder when I see a chain fall system being used.

I have related this experience to many people over the years and learned I was fortunate to survive the ordeal–not only the accident, but also the first aid.

Merthiolate, the marketing name coined by Eli Lilly and Company for the antiseptic Thimerosal, is compounded of fifty percent mercury and the caustic chemicals alcohol and benzalkonium chloride.

Because of Thimerosal’s toxicity, Merthiolate was essentially banned from general usage as a topical treatment by the 1990s.

Looking back to those days of such primitive medicine, I often reflect on why we lived through such treatments. I guess one of the main reasons is, we didn’t have crowded doctor’s offices and hospitals, which today bring along their own set of detrimental toxic bacteria and contamination to contend with.