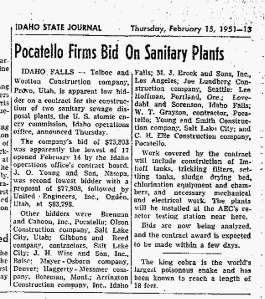 Work covered by the contract will include construction of Imhoff tanks, trickling filters, settling tanks, sludge drying bed, chlorination equipment and chambers, and necessary mechanical and electrical work. The plants will be installed at AEC’s reactor testing station near here.

Bids are now being analyzed, and the contract award is expected to be made within a few days.