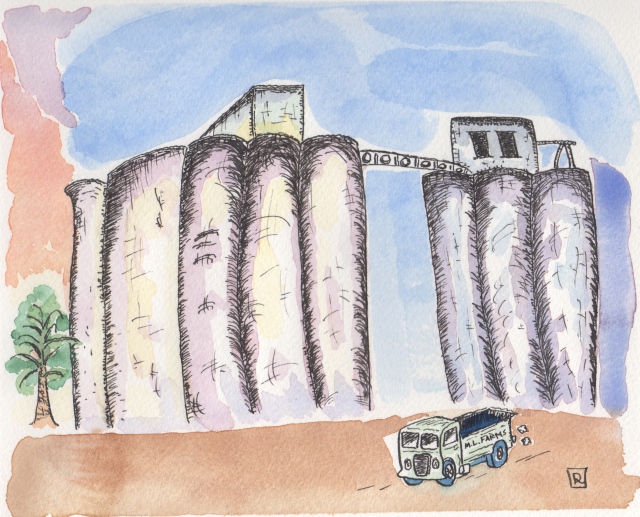 I see why grain elevators proliferated like mad–like mice, actually–starting in 1949.

This happened before Ezra Taft Benson, the crusader against Socialism, became Secretary of Agriculture in 1953, so the trend can’t be attributed to Mormon food-hoarding instincts in the face of Doomsday.

Here’s the story: Section 417 of the Agricultural Act of 1949 made an extra $8 million in cheap loans available to farmers’ cooperatives through the Commodity Credit Corporation.

The United States Department of Agriculture figured the private sector wasn’t keeping pace in grain storage as farmers realized increasingly bountiful crop yields. The USDA stepped in to provide the incentive to build storage capacity. The government price supports had resulted in hundreds of millions of bushels going nowhere.

Washington’s policy of building “warehouse” capacity was of enormous benefit to established outfits like Tillotson Construction Company and J.H. Tillotson, Contractor. For the principals, like my grandfather, Reginald O. Tillotson, it became a matter of  dashing between farflung towns in order to make his sales pitch. And the CCC also breathed life into new organizations like Mayer-Osborn Company.

Given certain conditions, the loans–which were extended through the government’s Banks for Cooperatives–were  intended to cover up to eighty percent of construction costs, with the rest funded by local sources. The eighty percent would cover $100,000 of what looks like an  average cost of $125,000 around then, so we’re talking about eighty new elevators in a year’s time.

And that’s in addition to what supposedly would’ve been ordered in normal periods, although who would turn down a government subsidy and pay retail?

Indeed, I’ve already heard one story of a group forming, with maybe five businessmen kicking in $5000 each, to take up the government’s kind offer, not caring about the disposition of the grain after the three-year guarantee (on new storage) ended.

The CCC pledged it would use seventy-five percentof the additional capacity. And farmers were lining up to sell to the CCC. Indeed, build it and they will come. The more of the subsidized canisters that the government provided, the more that was needed.

“The possibility that 1950 will present another storage crisis is evidenced by the latest report of the Department of Agriculture, which shows that as of Nov. 1, farmers had put approximately 353,746,480 bushels of 1949-crop[s] … under CCC price support,” reported the Farmers’ Elevator Guide in December of 1949. “This was nearly 100,000,000 bushels more than with 1948-crop produce.”

Meanwhile, the government had frozen construction of commercial buildings other than hospitals, churches, and schools. So while the traditional construction companies were fighting over those slim pickins, the Tillotsons and Mayer-Osborn, with their specialized knowledge in shaping, reinforcing, and pouring concrete, dashed back and forth like bees, covering the land from Alberta to South Carolina.

They knocked together slip-forms and jacked their way up beyond 100 feet, grinning the whole way.